Matthew Wolff Is A Bad, Bad Dude And Joined An Extremely Elite List Of Names With His Win On Sunday 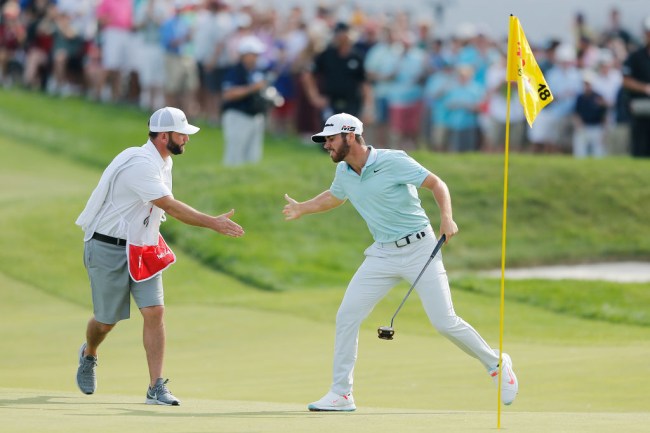 Heading into this past week’s 3M Open in Minnesota, Matthew Wolff had been a professional golfer for a whopping 28 days. In fact, Thursday’s opening round marked only his seventh round on the PGA Tour as a professional. Fast-forward to Sunday and he now finds himself on an exclusive list with the likes of Tiger Woods, Jordan Spieth, Rory McIlroy, Raymond Floyd, Seve Ballesteros and Phil Mickelson.

Ever heard of those guys? At just 20-years-old Wolff became the seventh man to earn his way onto the list of players to earn their first win on Tour over the past 80 years before being able to buy a drink.

.@matthew_wolff5 is the 7th player in the last 80 years to win on the @pgatour before age 21. Each of the previous 6 went on to win at least three major championships (Woods, Ballesteros, Mickelson, Floyd, McIlroy, Spieth).

In one month of being a professional, Wolff finds himself on a list of players that have a combined 36 major championships between them. Golf is wild.

Wolff was unconscious over the weekend firing a 62 on Saturday followed by a closing round 65 at TPC Twin Cities. He had a total of 15 birdies over the weekend and saved his lone big bird of the week for the 72nd hole as he drained a 26-foot eagle putt to earn the win by one at 21-under.

He knew it was good before it went in. 💯

Please take note of the sauce he displayed during that final putt by the way. He didn’t even watch the thing fall, he knew it was dropping.

Setting up the scene for that putt, just in the group in front of him Bryson DeChambeau made eagle at the last to move to 20-under. Wolff had the advantage of being in the last group on the golf course, but for a rookie to step up in that situation and show that sort of confidence is flat-out absurd.

Wolff wasn’t the only rookie battling for his first win on Sunday. Collin Morikawa was making only his fourth start as a professional and was going back-and-forth with Wolff all day long. The former Cal Golden Bear shot 66 on Sunday and missed a 25-foot eagle chance at the last to force a playoff with Wolff.

The difference with Wolff, Morikawa, Viktor Hovland and company is that their games aren’t only centered around beating it off the tee and hoping the putting and ball-striking catch up. Sure, they’re long off the tee, but their games are so well-rounded already that it makes it flat-out scary to think about how good some of these guys’ careers really may turn out to be.

Damn, is golf in a good spot right now or what?