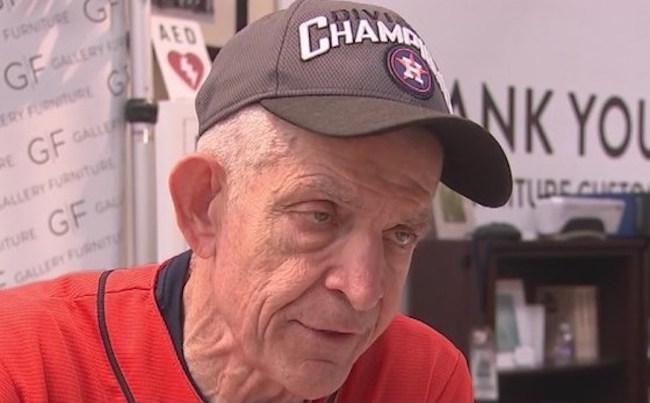 The Astros came into the 2019 season as co-favorites to win the World Series alongside the Red Sox and the Yankees and would ultimately come ever so close to securing their second championship in three years before losing to the Nationals in seven games on Wednesday night.

Prior to the season, furniture mogul Jim McIngvale—who is better known as “Mattress Mack”—decided to make things a little interesting by launching a promotion in which people who bought more than $3,000 worth of bedding wouldn’t have to pay for it if the Astros brought another title back home.

Last month, McIngvale realized there was a very real chance he’d have to pay up so he began a frantic search for sportsbooks that would be willing to shoulder some sizeable wagers before finding one that agreed to allow him to risk $3.5 million.

In the ensuing weeks, Mattress Mack placed a few more bets that would ultimately total $12 million and he was in attendance during the final game of the season to root his Astros on.

Darren Rovell tagged along with McIngvale and was there to watch things play out while providing the world with updates along the way.

The Astros jumped out to an early lead and Mack seemed to be in pretty good spirits.

Astros go up 2-0 after 5 innings on Carlos Correa shot down the third base line. “Mattress Mack” Kam: pic.twitter.com/cJItQjLM8o

However, reality eventually set in after the Nationals took the lead in the 7th inning and never looked back.

“Mattress Mack” spent a lot of time & money flying around the country gambling to hedge his $20 million in liability from his “Astros win” promo. He wanted to give away the mattresses & furniture. With the Astros down 4 into their final at bats, the realization is setting in. pic.twitter.com/uBxErEbP40

Sure, he might have “lost” $12 million but something tells me McIngvale isn’t too broken up over things, as Newsweek previously reported (and Rovell also noted) he was on the hook for almost $20 million thanks to his promotion, which means he likely netted upwards of $8 million.