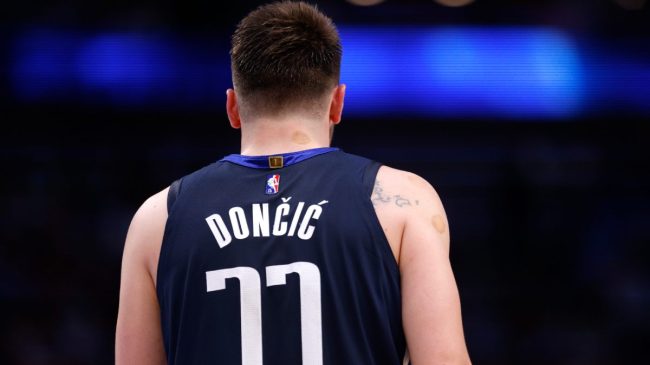 The Dallas Mavericks narrowly lost to the Denver Nuggets on Sunday night after falling 98-97. They’re still in the running right now, but the fans might be turning on Luka Doncic. He was seen flopping yet again and it sounds like the fanbase is getting sick and tired of it.

According to Mavs/Magic Draft, Doncic’s flopping abilities were on full display against the Nuggets. So much so, that on one particular play, they suggest this could “be the worst flop of his career.”

Luka’s flopping was atrocious tonight. He baited refs with nonexistent or forced contact by him, then flamed the refs while the Mavs play 4-on-5. The habit has to stop.

Then there’s this flail and flop over being blocked clean. Might be the worst flop of his career. pic.twitter.com/MS7xnRpkuS

On top of that, Luka Doncic continuously complains to the referees for not calling fouls that aren’t actually happening. He’s received plenty of technical fouls lately, as the Mavericks’ point guard consistently barrages the refs, per Mavs/Magic Draft.

the worst part is that at the next dead ball he complained to the refs about getting hit in the head!

He’s at what, 5 techs through 15 games? It’s time Luka chills out with refs and focuses on the next play once and for all

It’s not a great look for Luka Doncic whatsoever. He’s a fantastic basketball player, there’s no doubt about that. Regardless, he tends to flop so much that many just expect it from him now.

Mavericks fans seem to agree that his flopping is getting out of hand, as they start to call out the superstar point guard.

Warms my heart to see you call this out.

A Luka Doncic flop is about as comment as the sun rising every day.

I appreciate Luka’s talent, and if he were on my team I would probably overlook some of his antics, but he is seriously one of the most annoying/irritating players. Constant complaining and acting.

Has complaining to the referees ever worked for anyone in the history of sports?

Where’s angry focused Luka? But we’re how many games in and he still doesn’t get the refs don’t care. Like any of them. They’ve never gone and been like, by golly Luka you’re right here’s two free throws, 10 seconds, and the ball. Get your head examined kid! It’s not happening!

Maybe one day the Mavericks guard will change his habits. For now though, it appears to be a bad habit that’s costing the team on certain plays. It’s not a great look that the fans are calling him out. If they’re tired of the flopping, then how does the rest of the league feel?