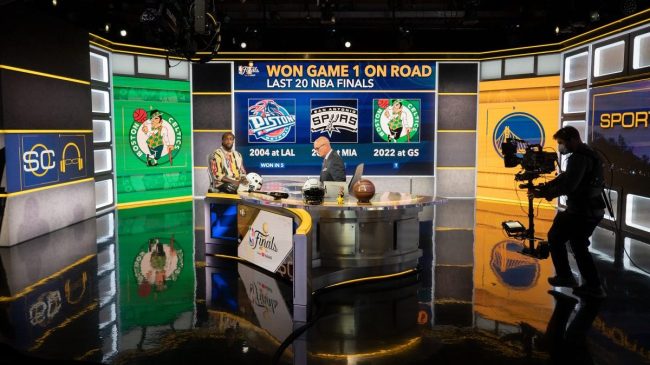 The start of a new NBA season means new players, new narratives and perhaps even a new NBA MVP?

It also means a new upgrade for ESPN’s broadcast of NBA games. The broadcast giant announced a host of new changes to their in-game and pregame presentations on Tuesday.

ESPN is updating its NBA presentation, including new music and graphics. Here's the scorebug. Sounds like two priorities:

-Better job matching jersey colors so viewers can tell which team is which
-Shrinking the scorebar overall to leave more room around it. pic.twitter.com/new4LzKKvG

The new theme is set to debut Thursday. Here are some other new looks. pic.twitter.com/7kSdBtECME

Among those changes are a new score graphic, new colors on the score bug and a change to the network’s NBA theme music.

So while the voices will be the same, with Hubie Brown back for a package of around 15 games and JJ Redick taking on an expanded role, all anyone could talk about was the new theme song.

The song itself really isn’t that bad in this writer’s opinion. Though it sounds a lot like a generic loading screen song ripped from an old NBA Jam game.

Other fans, however, were not quite as receptive to the change.

If we no longer hear this during the finals I might actually cry https://t.co/qRlNVIg1Xk pic.twitter.com/jUwwYgWMXE

Some compared it to a rejected rap song.

This sounds like J. Cole made it for Blueprint 3 but Jay said no https://t.co/bueJYR3Rv6

— Subscribe to the You Know Ball Patreon (@TrillBroDude) October 4, 2022

Others didn’t care about the song, so long as their team is winning.

if this is the song i have to hear before the trophy presentation in a jubilant Sixers locker room…so be it https://t.co/xYiwgyWBUc

While some even thought the new theme was pretty good.

Idk why everyone hates it so much, I kinda like it https://t.co/ZO0sjU65lF

Most, however, absolutely despised the song.

Probably not the response ESPN expected when it likely spent truckloads of money developing the new theme.

ESPN will debut the theme on Thursday night when it broadcasts a preseason game between the Miami Heat and Brooklyn Nets.

The NBA regular season begins on Tuesday, Oct. 18 with the Celtics hosting the Sixers and the Warriors hosting the Lakers. ESPN’s first regular season national broadcast is Oct. 19. The Knicks host the Grizzlies in the front end of a doubleheader with the Mavericks visiting the Suns in game two.

The NBA might not be officially “back” yet. But fans are definitely in midseason form with their anger toward anything and everything.