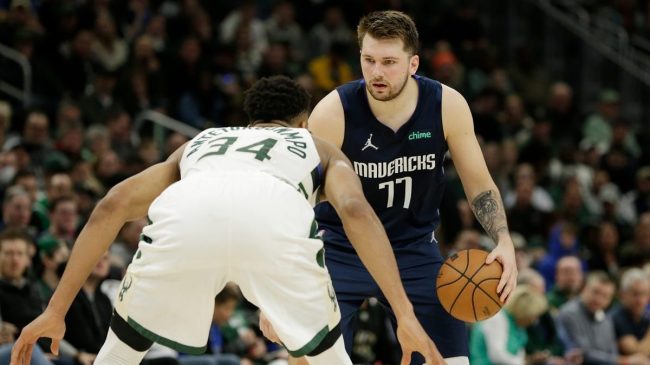 The voting for the NBA MVP award is almost always a hot topic, and it’s almost always contentious. There are no true parameters for voting and narrative controls a lot of the vote.

In recent years, voters have skewed toward using advanced metrics to determine that Denver Nuggets big man Nikola Jokic was worthy of back-to-back MVP Awards. In fact, the last two winners have both been back-to-back winners. Giannis Antetokounmpo won the award in both 2019 and 2020.

But now NBA general managers feel it’s time to crown a new winner, which could play a key role in voting if it’s close down the stretch.

Luka Doncic has been a superstar for the Dallas Mavericks since the moment he stepped foot on an NBA court. The Slovenian star made the NBA All-Star Game in three of his first four seasons in the league and finished fourth, sixth and fifth respectively in each of the last three NBA MVP races.

Now GMs around the league expect him to take his game to an even higher level.

In a poll conducted by NBA.com’s John Schuhmann, 48 percent of NBA GMs picked Doncic to win the league MVP. Antetokounmpo checked in at No. 2 with 34 percent, with Joel Embiid a distant third at 14 percent. Interestingly, Jokic picked up fewer than three percent of the vote.

Despite not picking Antetokounmpo to win the MVP, most GMs did pick the Bucks to win the Larry O’Brien Trophy. Milwaukee picked up 43 percent of the vote to win it all, ahead of the Warriors with 25 percent. The Los Angeles Clippers, surprisingly, checked in at No. 3 with 21 percent of the vote.

The Orlando Magic selected Paolo Banchero with the No. 1 overall pick in the 2022 NBA Draft. And with No. 2 pick Chet Holmgren out for the entire season with a foot injury, GMs think Banchero is the runaway Rookie of the Year favorite.

Banchero received a whopping 79 percent of the votes, with Sacramento’s Keegan Murray in second with 17 percent.

Interestingly, Banchero received just 31 percent of the vote when asked who the best rookie will be in five years. Holmgren grabbed 28 percent of that vote, while Detroit’s Jaden Ivey and Houston’s Jabari Smith each garnered 14 percent.