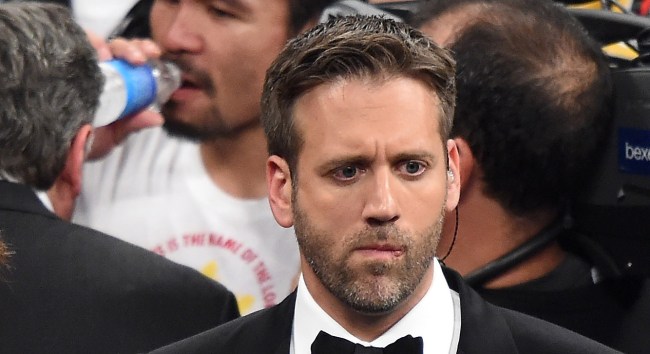 Listen, I get it. You don’t have to actually be good at your job to host a sports show on ESPN or Fox. All you have to do is spout nonsense, get the internet talking about how stupid you are, and bask in all the free publicity.

Shows like ESPN’s First Take and Fox’s Undisputed have taken that concept to a whole new level over the past couple of years, so it’s really no surprise that it happened yet again on Thursday with Max Kellerman.

In case you missed it, the 2018-19 All-NBA team was announced on Thursday with Steph Curry, Paul George, Nikola Jokić making the First Team along with Giannis Antetokounmpo and James Harden, who were unanimous selections.

Naturally, there are names in certain spots on the three All-NBA teams that one could take issue with, however, does anyone out there think James Harden does not belong on this year’s All-NBA First Team?

Please put your hand back down, Mr. Kellerman.

So, according to Kellerman, Harden shouldn’t be on the First Team because postseason play should count more than the regular season, but LeBron James, whose team did NOT make the playoffs should be All-NBA First Team along with Durant who has hardly played at all?

Wow. He is trolling so hard with that take.

No one in their right mind, or who isn’t trolling for views, would keep a man who averaged 36.1 points, 6.6 rebounds, and 7.5 assists in 36.8 minutes per game off the All-NBA First Team.

I’m speechless. Twitter, however, as usual, is not, beginning with Lakers forward Kyle Kuzma.

They have to start drug testing talk show ppl. https://t.co/qIiMOOjHKN

I’m going to give Max a pass on this horrible take this morning and let him rethink this because he’s trippen with this one!

Dumbest take. So by your logic if KD was injured a month into the season he should make 1st team, because you would still pick KD to start a team. Lebron and Kawhi missed too many games to be 1st team. I know your just saying outlandish things for ratings, but he is top 3 for MVP

Get this guy off TV.

This is the same guy that was unsure if Larry Fitzgerald is a Hall of Famer.

makes me wonder if cte from the boxers was contagious