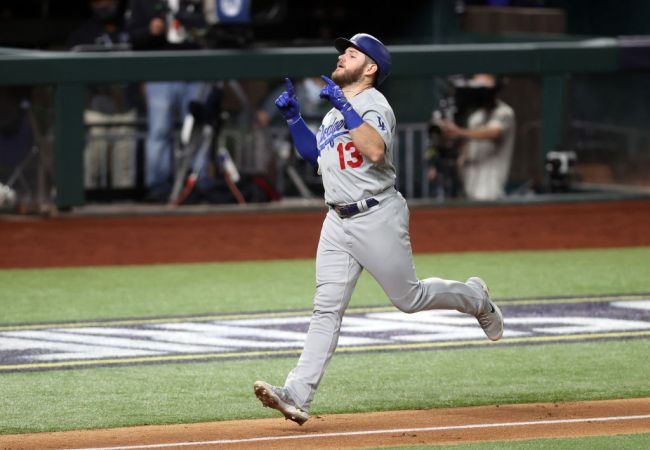 Los Angeles took Game 5 of the World Series over Tampa Bay by a score of 4-2 behind a pair of RBI singles and a pair of home runs. The final run of the evening came in the top of the fifth inning on a Max Muncy dinger that probably just landed somewhere over El Paso. Tyler Glasnow hung a 99 mph four-seam fastball over the middle and Muncy sent the 434-foot bomb off of his bat at 111.5 mph with a launch angle of 34 degrees.

The velocity and distance of the home run is one thing, but the pimp job is another. Muncy knew right away that he got ahold of the pitch and made sure to admire his work. What’s even more impressive is the speed in which he gets the bat out of his hands after contact.

Max Muncy knew he got all of that one 😅 pic.twitter.com/sfzzOn96Rk

By my (very unofficial) calculation, the time from when the ball hits the barrel to when the bat hits the ground is .83 seconds.

And this isn’t the first time that Muncy has done this. In fact, he might be the king of bat drops. Not flips, not tosses, but drops.

Let’s look first at his walk-off home run  that came in the bottom of the 18th inning against Boston in the World Series. The game began on Oct. 26, 2018 and finished well into the next morning, when Nathan Eovaldi gave him a pitch to hit and Muncy delivered.

I have him clocked at around 1.15 seconds from contact to bat on the ground. It is a little bit slower than last night’s effort, but he took more of a showman’s approach to end the longest game in World Series history.

He got his speed up the next year and got this started with a blistering pace on a home run in the Rocky Mountains.

I have Muncy clocked at .88 seconds against Colorado and just around 1.2 seconds here against San Francisco. This one came as a 10th inning walk off shot, so the performance aspect slows down the drop, but it still comes with blazing quickness.

The funky Muncy picked up right where he left off last season in 2020 and hit 12 taters on 203 at-bats. Two of those home runs came on Jul. 24 and his second solo shot of the evening clocked in at a career-low .61. Sheesh.

Muncy, who was selected by the Cleveland Indians in the 41st round of the 2009 MLB Draft chose to forgo a professional career and played three years of college ball at Baylor. He was drafted in the fifth round in 2012 by the Oakland Athletics and was released toward the end of spring training in 2017. The Dodgers signed Muncy in April of that year and was called up almost a year later in 2018. He just missed out on his first All Star Game that season but participated in the Home Run Derby and was chosen for the game in 2019.

The 30-year-old from Midland, Tex. is back in his home state for the 2020 World Series and firmly cemented himself as the king of bat drops last night.