Max Scherzer Broke The F*ck Out Of His Own Nose 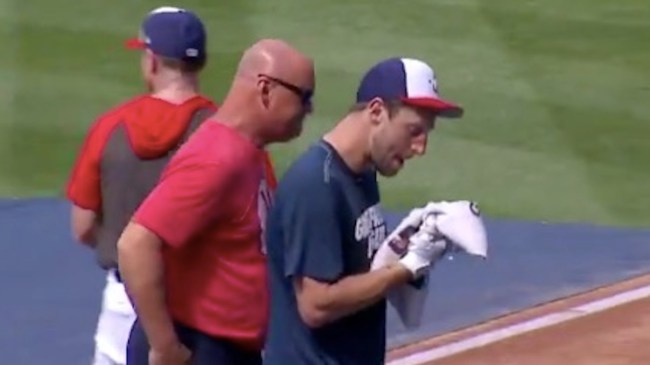 In their first season without superstar outfielder Bryce Harper, the Washington Nationals have become one of the most benign teams in Major League Baseball, as they currently sit fourth in the NL East with a record of 33-38 (at the time of this writing).

But just because the Washington Nationals season was over before it actually began does not mean it is not without entertainment. Case in point: three-time Cy Young winner Max Scherzer breaking the absolute fuck out of his own nose during batting practice.

In what seems like a move reserved for a team such as the New York Mets, Scherzer — who is still one of the game’s most dominant pitchers despite now being 34-years-old — broke his own nose after he bunted a ball off of his face during the Nationals practice on Tuesday.

And while we hate to laugh at the plight of others around these parts, the video is a must-watch all the same.

WATCH – Max Scherzer, who's scheduled to start Wednesday, was hit in the face by a ball during batting practice.

At this time, the Nationals have yet to confirm the status of Scherzer, who was set to start one of Washington’s two games against the Philadelphia Phillies in their doubleheader on Wednesday.

According to ESPN, when speaking to reporters following Tuesday night’s rainout against the Phillies, Nationals manager Dave Martinez said “the only thing right now is that [Stephen] Strasburg will still pitch on Thursday.”

Scherzer, who is one of only ten pitchers in the history of Major League Baseball to win least three Cy Young Awards, is 5-5 on the season with a 2.81 ERA.

Given the Nationals precarious position in the National League, Scherzer could potentially be a target for contenders come the trade deadline, similar to Justin Verlander back in 2017.

However, given the ace’s outlandish contract — he signed a seven-year, $210 million contract with the Nationals prior to the 2015 season — a move for the strikeout king of the 2010s will likely prove to be difficult.