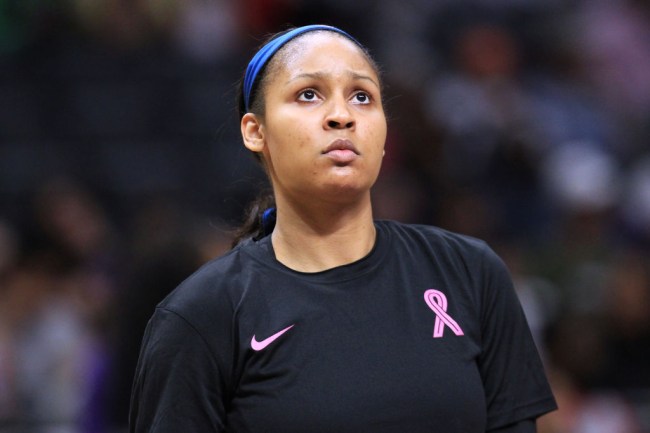 By most accounts, Maya Moore is very, very good at basketball. She’s won four WNBA championships with the Minnesota Lynx—including one where she earned the honor of Finals MVP a year after she won that award for her efforts in the regular season—and she’s also led the United States to two gold medals at the Olympics.

She also won back-to-back national titles while playing at UConn, which is certainly admirable but not as impressive as everything else because the Huskies are like the Madden 2004 Michael Vick of women’s college basketball.

If that’s not enough to sell you, then maybe the words of some guy named Kobe Bryant are, as he once said he believed Moore had the talent to play in the NBA. We’ll never know if that was the case, as she instead pursued a career that resulted in her dominating the female competition for close to a decade until things took an interesting twist last February when she announced she was temporarily stepping away from the game to set off on a journey of self-discovery.

If you’re not familiar with the WNBA, this was as much of a bombshell—if not a bigger one—than when Michael Jordan announced he was stepping away from the game that made him famous to give baseball a try. Like MJ, Moore found herself being called somewhere else, but in her case, she felt the need to swap the court for a courtroom.

Moore had a great-uncle who worked as a prison minister who struck up a relationship with a Missouri man named Jonathan Irons, who was hit with a 50-year prison sentence when he was only 16 years old after an all-white jury ruled he was responsible for a botched burglary that resulted in the owner of the house that was broken into being shot twice despite no hard evidence linking him to the scene.

Irons maintained his innocence, and after looking into the case, Moore felt like it was her duty to do what no one else had and go to bat for him. She may have been 29 and arguably in the prime of her career, but when you consider she’d already cemented her legacy as a basketball legend, it’s a bit easier to understand her mentality.

With Moore’s help, Irons appealed his sentence, and in March, his conviction was thrown out altogether, making him a free man after spending the previous 23 years incarcerated. However, the superstar is still biding her time, and while the fate of this year’s WNBA season is up in the air, she’s stated she’ll continue her sabbatical no matter what happens.

Moore is obviously more concerned by what she had to lose by not stepping away from basketball as opposed to what she could’ve gained by continuing to play. However, the statheads over at FiveThirtyEight couldn’t stop themselves from examining the impact her decision to push the pause button will have on the basketball side of her legacy.

The primary focus was on a fairly complex metric that evaluates the number of wins an individual player is responsible for generating. Over the course of the 2010s, Moore churned out a total of 46 wins and averaged 5.75 per season, making her the second most-productive player on that front over the course of the decade.

They also estimated Moore stepped away from the game a little over 2/3 of the way through her career (based on the average WNBA player’s trajectory), but if she had kept playing at the pace she was at, she would’ve secured the second spot behind Tamika Catchings when it comes to the most wins generated overall (it’s not the sexiest statistic but it’s perhaps one of the better reflections of all-around talent).

Moore is planning to return to basketball at some point, but at this point, it’s pretty clear she doesn’t feel like she has anything else to prove on the court. Here’s to hoping FiveThirtyEight dreams up a way to quantify social justice efforts so we can get a concrete idea of what her legacy truly is.