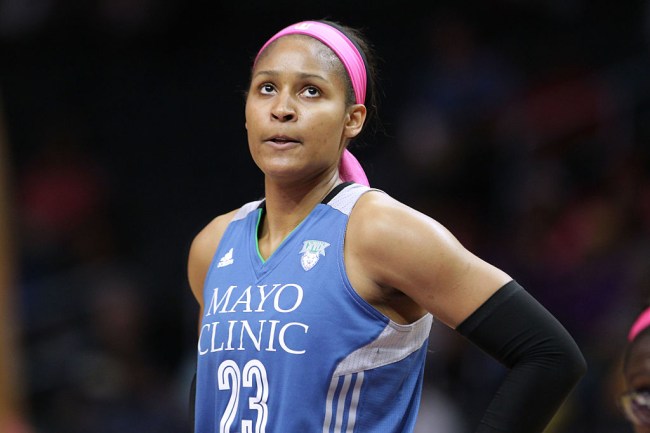 Maya Moore showed she had all of the makings of a star during her time at UConn and went on to realize that potential (and then some) after developing into one of the most dominant players the WNBA has ever seen. It’s hard to top what she’s managed to do on the court but she’s given herself a run for her money based on what she’s recently done off of it.

Last February, Moore announced she was temporarily stepping away from the game she loved to embark on a journey of self-discovery.  It was shocking but not entirely unprecedented, as at least one other basketball league has seen its best player unexpectedly announce they’re stepping away from the game to explore another passion. In this case, however, Moore was more concerned with justice as opposed to baseball.

Since 2016, Moore has been advocating for changes in law enforcement and the legal system. Soon after the nation’s eyes turned to Ferguson, she helped lead the Minnesota Lynx in one of the first athlete-backed protests for the Black Lives Matter movement. She helped pave a path for others to follow; a path that eventually led her to freeing an innocent man from prison.

22 years ago, Jonathan Irons was given a 50-year sentence stemming from a botched robbery in Missouri despite having nothing to do with the crime. The case eventually came to Moore’s attention and she provided him with the resources and support necessary to the conviction overturned.

Irons was finally released this week and Moore posted a video of her standing outside the prison to greet him as he became a free man for the first time in over two decades. She dropped to her knees like she just won championship but this may have meant even more.

In the video, Irons says, “I feel like I can live life now” and you can tell on his face the relief and joy he is experiencing after suffering for so long. Moore told Good Morning America, “In that moment, I really felt like I could rest.” Despite her relief, she is still not planning on returning to basketball anytime soon and says she’s focused on taking some time just to reset a bit.

She may be out of the courtroom but it seems likely she’ll be back in before she steps onto a court. She’s already given up a lot by not playing but that’s nothing compared to what Irons and others like him have lost.