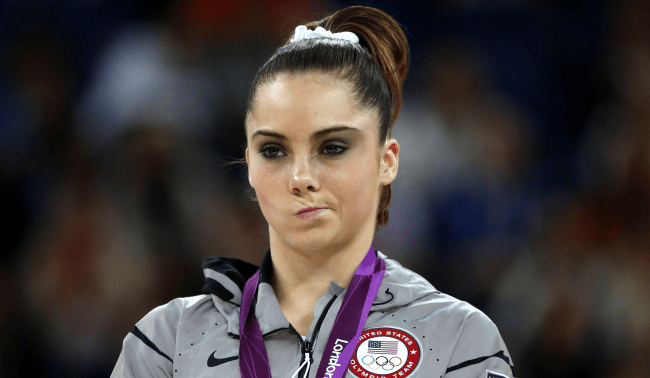 In a scathing series of tweets and Instagram posts, 2012 Olympic gold medalist McKayla Maroney revealed the horrific conditions she was forced to compete under in London.

“If you want to hear the behind the scenes of what ACTUALLY goes down during the Olympic Gymnastics event finals (specifically vault finals) please go watch my Instagram story (link in bio),” Maroney wrote on Twitter. “I think a lot of people don’t understand how terrible it’s set up for the athletes.”

In her Instagram story, Maroney destroys USA Gymnastics for the way athletes were treated when she was competing.

Among the many disturbing allegations made by Maroney was the claim that she was lied to by convicted pedophile trainer Larry Nassar about the extent of her injuries heading into the Olympics.

“You guys know I competed on the Olympic team as a vaulter. I also came in ready for floor, but as soon as I got to London I broke my foot,” said the decorated gymnast. “I also, two weeks before the Olympics, hit the back of my head so hard that my nose broke. A bone in my nose exploded to protect my brain from brain damage.

Maroney says she broke her foot, in large part, because then Team USA head coach Marta Karolyi forced her to practice as soon as the team landed in London when she was still jet-lagged and “dizzy as hell.”

“Like, I felt terrible,” she recalled. “I looked at my coach before the beam routine like, ‘Really? You’re going to make me get on this thing right now? I feel like s–t.”

“He also lied to Marta and told Marta that my foot wasn’t broken because he was the one who helped with X-rays and passed along the information.”

McKayla added that the injury to her foot could have ended her career.

“It was actually my foot, the sesamoid bone in my foot was completely shattered and dislocated, and it hurt so bad,” she said. “I had to get a miracle surgery [after the Olympics]… and they told me I’d probably never walk in heels again, never do gymnastics again.

‘Me competing at the Olympics was literally risking the rest of my gymnastics career.”

Karolyi, her coach, didn’t seem to care, said the now-25-year-old.

“Márta yelled at me saying, “Why are you being so dramatic? This is an old break.” It wasn’t an old break. It was a fresh break.”

Maroney also lambasted the International Gymnastics Federation, tweeting, “They 100% prioritize TV over athletes every time — and it hasn’t even worked, views are down. They’re insanely unsafe regulations definitely pushed me to retire. I have so many complaints.”

These gymnasts parents aren’t even allowed in Tokyo right now, & they’ll be there for a month or longer.

My parents had to sign a waiver before me leaving for competitions or camps stating that I’m now in USAG’s care, & they’ll protect me. If they don’t sign it we can’t compete. https://t.co/9UEW88ipgv

Maroney continued on Twitter, taking further aim at USA Gymnastics and the United States Olympic Committee, writing, “USAG says they’re not responsible for the abuse that happened. Well then who is? I was a minor in Tokyo & in London. We were not allowed to see our parents until after competitions, they were not allowed to stay at our hotel, or speak to us in person. We were in ‘USAG’s care.’

“Parents are seen as a distraction, we would get in trouble if we spoke to them. My mom would send me packages of food to my hotel in Tokyo, because I was starving. She did everything she could to help me.

“USAG then points fingers at the USOC for abuse because they manage Olympics, international competitions, and all things Team USA,” Maroney continued.

“Tell me why I never spoke to anyone from the USOC until the day I got to London?? and they just gave me rules of things I shouldn’t say or do.

“USOC was so hands off I didn’t even know I was under their care — Or that the Karolyi camp I trained at every month was an Olympic facility managed by them!!? To me It felt more like a gym in the middle of a forest, with limited food supply, and a doctor molesting me twice a day.”

So, @USAGym and USOC aka @TeamUSA

When I was under “your care” in Tokyo competing for Team USA at 15, and my parents weren’t allowed to stay in my hotel, or see me in person…
When I was all alone, naked, with Larry Nassar on top of me for 50min balling. Who’s fault is that?

“@USAGym @TeamUSA Why did I have to walk the hallways of the hotel you booked me at 2am alone, and get locked out of my room because my roomate [sic] Sabrina was asleep,” McKayla Maroney added in another tweet. “I then told my teammates what happened the next day after practice with John Geddart in the car, and got yelled yet.

“I was told to ‘Shut the f–k up, and don’t ever say anything like that about Larry Nassar again’ by an older teammate I looked up to,” she continued.

“That scared the hell out of me, so I listened, and didn’t say anything for a long time. I just suppressed it until it came up again in 2015.”