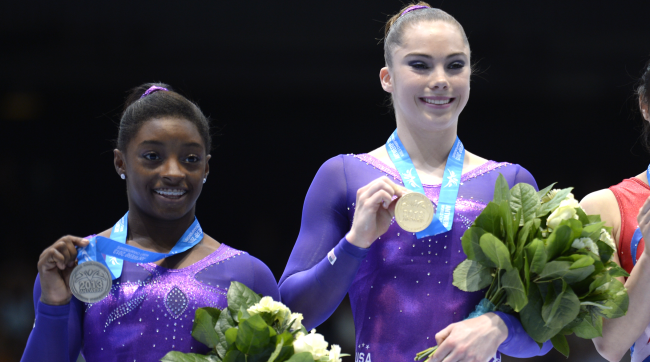 Four-time Olympic gold medal winning gymnast Simone Biles was expected to be one of the main faces representing the United States at the delayed Tokyo Olympics.

Now, after withdrawing from competition – both the team as well as the individual events – Biles has fulfilled that expectation. Just not for the reasons everyone expected.

Biles reportedly withdrew from the Olympics due to what is referred to in gymnastic circles as the “twisties.”

It’s the equivalent of getting the yips in golf or in baseball, like what famously happened to athletes like Tom Watson, Bernhard Langer, Steve Sax, Chuck Knoblauch and Rick Ankiel.

Only in Simone Biles’ case, it can be much more dangerous.

Related: Video Reveals What Simone Biles Told Her Teammates After She Decided To Quit

After failing to complete her vault as she had planned, narrowly avoiding injury on her landing, Biles pulled out of the competition citing mental health issues.

2016 Olympic gold medalist Laurie Hernandez, while analyzing Biles’ vault attempt, said, “The fact that she landed while getting lost in the air is incredible.”

Following Biles’ withdrawing from competition, 2012 Olympics gold medalist McKayla Maroney took to Instagram and shared her experience with the “twisties” and spoke about how dangerous a mental block such as that can be to a gymnast.

What Biles did while in the air during her vault attempt is called “balking,” said Maroney.

“Balking for skill means that you’re going for something and mid-way your body stops,” Maroney added. “It can either be your mind stopping you or your body and in Simone’s case I think it’s her body, but she’s like… there’s no other word for it so you kind of just call it a mental block.”

The 25-year-old gymnast turned singer also said that this mental block can come out of nowhere and that it can occur from just trying to do too many skills.

Other former and current Olympians like Aly Raisman, Michael Phelps and Katie Ledecky have also expressed their support for Biles as she tries to figure things out.

American swimmers Katie Ledecky and Erica Sullivan showed support for Simone Biles following her exit from the women’s team gymnastics final at the Tokyo 2020 Olympics. Both Olympians emphasized the importance of mental health and encouraged Biles to "look after herself." pic.twitter.com/MY0YfWkTtl