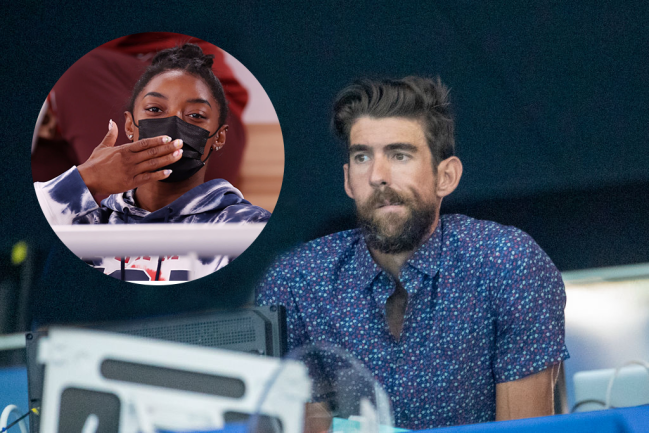 As the most decorated athlete in Olympic history, Michael Phelps has been there, done that. He offered some first-hand, humbling perspective on Simone Biles’ decision to withdrawal from competition.

"We're human beings. Nobody is perfect. So yes, it is okay to not be okay."@MichaelPhelps reacts to the news of Simone Biles pulling out of the women's gymnastics team final. #TokyoOlympics pic.twitter.com/Jl2gmi7ORu

Biles, considered the greatest gymnast of all-time after nearly a decade of dominance and four gold medals in 2016, chose not to continue after one rotation during the team All-Around. She also elected not to compete in the individual All-Around competition on Wednesday.

Citing “the twisties,” Biles is dealing with the gymnastics equivalent of the yips. The phenomenon affects gymnasts while they are in the air, so the disconnect between mind and body can be dangerous.

Prior to her decision to withdrawal, Biles attempted a 2.5-twisting vault in the team final, but her mind stalled after just 1.5 twists.

IN CASE YOU MISSED IT: Video of #Olympic gymnast Simone Biles opening vault today which caused her to withdraw due to medical issues pic.twitter.com/Bg4cV93GUJ

“I had no idea where I was in the air,” she said. “I could have hurt myself.”

While discussing the decision after the United States took the silver medal in the team event, Biles explained that stress and pressure caused her struggles. She was not in a good place mentally to compete.

Biles’ decision has largely been the focus of conversation over the past two days and strong opinions pull to both sides. However, regardless of whether someone agrees with Biles or not, they have never and will never be in her position.

The exception to that notion comes with current or former Olympians like Phelps. The 36-year-old is serving as a TV analyst for NBC during the Tokyo Games and offered his thoughts.

Phelps, who was under constant scrutiny throughout his career, revealed in 2018 that he struggled with depression and contemplated suicide after the 2012 Olympics.

He said that Biles’ mental health struggles and decision to withdrawal “broke his heart” and he hopes that what happened will serve as “an eye-opening experience” for the prioritization of mental health in sports.

“I felt like I was carrying, like Simone said, the weight of the world on my shoulders. It’s a tough situation. … I hope this is an eye-opening experience.”

To hear from someone who has stood in the same (or similar) shoes as Biles goes a long way.