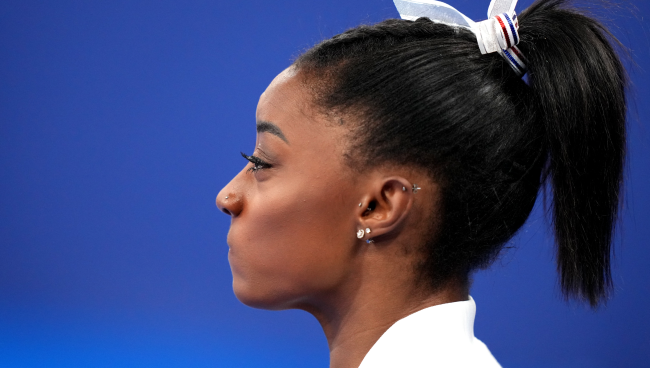 Biles, who had not suffered an injury, reportedly withdrew from the competition for mental health reasons.

“After the performance that I did, I didn’t want to go into any of the other events second guessing myself, so I thought it was better if I took a step back and let these girls go out there and do the job and they did just that,” Biles informed the media.

One of the most remarkable mixed zone press conferences I’ve known. In which Simone Biles described pulling out of tonight’s team event because she had to put her mental health first. Says she was inspired by Naomi Osaka among others #Olympics #ArtisticGymnastics pic.twitter.com/p3Rli5S7J0

Michelle Steele of ESPN reported that Biles also said, “I felt like it would be better to take a back seat… I didn’t want to risk the team a medal because they worked way too hard for my screw ups.”

Biles added, “It’s been really stressful this Olympic games…it’s been a long week, a long Olympic process, a long year. I think we’re a little too stressed out – we should be out here having fun and that’s just not the case.”

Now, video of what Simone Biles told her teammates after deciding to pull out of the competition has been released.

“I’m sorry. I love you guys, but you’re gonna be just fine,” said Biles. “You guys have trained your whole entire life for this, it’s fine. I’ve been to an Olympics. I’ll be fine. This is your first — you go out there and kick ass, okay?”

Simone Biles: "I'm sorry. I love you guys, but you're gonna be just fine."

"You guys have trained your whole entire life for this, it's fine. I've been to an Olympics, I'll be fine. This is your first — you go out there and kick ass, okay?" pic.twitter.com/r2RxWQ2Dsy

Team USA would go on to earn the silver medal without Biles, losing out to Russia.

Simone Biles’ former teammate Aly Raisman spoke to TODAY shortly after her withdrawal and said, “It’s just so much pressure and I’ve been watching how much pressure has been on her in the months leading up to the games and it’s just devastating. I feel horrible.

“I think that Simone is the biggest story going into the Olympics, so this is just really, really devastating. But I think it’s also just really important to think about how much pressure has been on her, and there’s only so much that someone can take. She’s human, and I think sometimes people forget that. And Simone, just like everyone else, is doing the best that she can.”

As for whether she will be back in competition at the Tokyo Games, Biles initially replied, “hopefully” and “we’ll see.” Stay tuned.

UPDATE: Biles has decided not to compete.