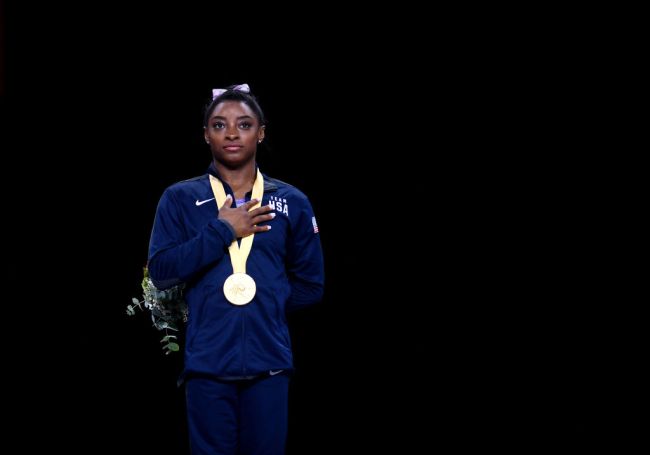 The most dominant gymnast of all-time has unexpectedly pulled out of the all-around women’s gymnastics final at the Tokyo Olympics, leaving the door open for Russia to secure gold.

Biles had just cut off her vault, making 1-1/2 rotations rather than 2-1/2, and landed with a big step. Her score of 13.766 was the lowest on vault thus far. Something is amiss.

It was initially reported by USA Gymnastics that the four-time Olympic gold medalist bowed out due to a “medical issue,” but NBC’s broadcasting crew indicated that the impetus was in fact “mental.”

The @NBCOlympics broadcast just said Simone Biles withdrawing from the gymnastics team finals is NOT injury related, it's mental health.

In the past, Simone has admitted to seeing a psychologist and taking anxiety medication, and just yesterday posted to her 4.5 million Instagram followers that she feels like she has “the weight of the world on her shoulders.”

In a telephone interview a week before leaving for the Tokyo Games, she was asked by The New York Times to name the happiest moment of her career.

“Honestly, probably my time off,” she said.

Biles is one of the dozens of women who were sexually abused by former USA gymnastics doctor Larry Nassar, and she revealed in her Facebook Watch series Simone vs Herself, that she slipped into a deep depression in the wake of the saga.

It’s since been reported by John Watson at BBC Sport, who’s spoken to Biles, that she is ok but “dealing with some things internally that will get fixed in the next few days.” He asked her if she will be back on Thursday for the women’s all around final. She said yes.

Simone Biles says she is "OK" and has been "dealing with things internally that will get fixed in the next few days."

When asked if she would be back on Thursday, she said "yes" 🙌https://t.co/1Blwgedmjf #bbcolympics #tokyo2020 #SimoneBiles pic.twitter.com/fczwlPMhvu

* SIMONE BILES: "AFTER THE PERFORMANCE I DID I JUST DIDN'T WANT TO GO ON"