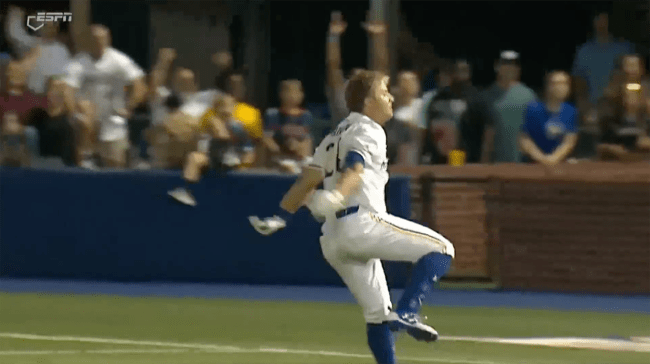 McNeese State baseball is one win away from earning an NCAA Tournament bid after walking-off Game 1 of the Southland Conference Tournament championship series in epic fashion on Thursday night. The hero, Peyton Johnson celebrated accordingly but embarrassingly came up hobbling after tripping on his way to second base.

After falling behind 4-5 in the seventh inning, the Cowboys tied things back up with a run in the eighth and the score held 5-5 into the 12th inning. At that point, head coach Justin Hill looked to the dugout for a spark and called on Johnson to pinch hit.

It couldn’t have worked out any better and McNeese State beat Southeastern in Game 1.

During his first at-bat of the entire Southland Conference Tournament, the redshirt junior delivered a deep fly ball to right centerfield. With a runner on third, Johnson got just enough of the ball to allow his teammate to tag-up and score on a walk-off sac-fly.

The victory marked the 12th-straight win in the conference tournament for McNeese, which ties the longest streak in league history. It was electric and Johnson turned to his dugout, threw his helmet into the air and proceeded to do something of an exaggerated, celebratory high-kneed moonwalk when he saw his teammate cross the plate to win.

As a result of the walk-off win, the Cowboys need to beat Southeastern just one more time to advance to the big dance.

WALK IT OFF! MCNEESE IS ONE WIN AWAY FROM PUNCHING THEIR TICKET pic.twitter.com/WdIywgUKKI

However, we can’t let Johnson off of the hook. As he celebrated the win, he tripped, fell to McNeese’s signature blue turf and came up hobbling.

Dude got hurt moonwalking it 😬😬 pic.twitter.com/ENO3H55SmN

Fortunately, it looks like Johnson is okay. He was in great spirits after playing the hero.

Tonight’s hero, Peyton Johnson on coming through when it mattered most. pic.twitter.com/yCuONAMDxC

Whether Johnson has any lingering ailments from his celebration or not, he has cemented his place in Cowboys folklore. The fact that he tripped and fell only makes the tale that much better.