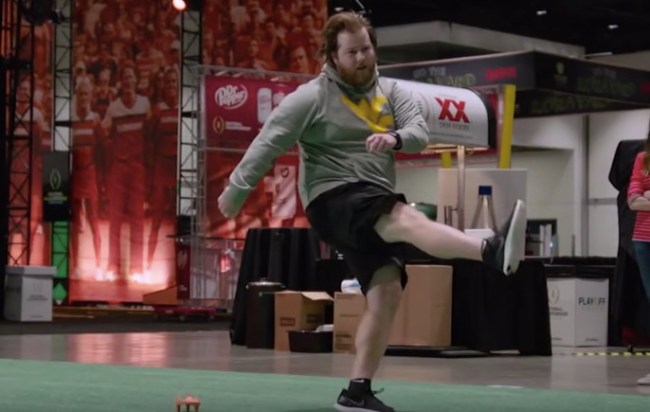 Kicking is easily one of the most underrated positions in football. It’s something that everyone takes for granted.

Kickers have one job and that job’s to make kicks, right? How can they possibly EVER miss a kick when all they’re supposed to be doing at all times is practicing kicks? Doctor’s appointment? Fuck that western medicine voodoo, get out there and practice your kicks. Birth of your first child? I’m going to need to see you make a 50+ yarder before you can leave practice, son.

ESPN’s Katie Nolan tracked down a bunch of Twitter hardos who have sent disparaging tweets to (or about) kickers this past season. She and ESPN kept a running document of these tweets then contacted the tweeters and said they’d fly them out to California the week of the National Championship but they couldn’t say *why* they were being flown to Cali by ESPN.

Upon arrival, they were shown their nasty tweets about kickers and then asked to make a field goal of the same distance. As you can imagine, this went pretty f’n poorly for the billy badasses who’d been trashing field goal kickers on Twitter.

I’ve gone on some weird trips for work without knowing a whole lot about the trip but even I’d never hop on a plane if someone said they needed me to fly across the country because of something I did on Twitter.

Changing gears a little bit, I have to say I’m on the side of these Twitter hardos here. I’ve never attempted to kick a field goal in my life but I’m blindly confident that if you gave me 15 minutes of practice, not even an entire fucking career, I’d be able to start making kicks within 35 yards.