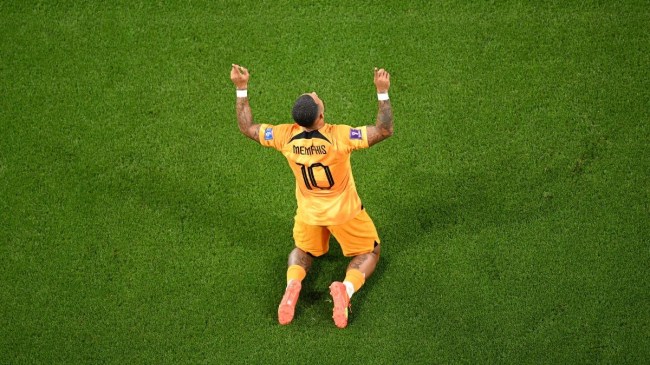 The United States’ 2022 FIFA World Cup ride came to a screeching half on Saturday morning after a 3-1 loss to the Netherlands.

The first of the three Dutch goals came from superstar forward Memphis Depay. Depay, a 28-year-old, plies his trade for FC Barcelona and is one of the Netherlands’ most colorful characters. As evidenced by his hilarious nod to former NFL superstar and current alleged criminal Antonio Brown.

In addition to his soccer career, Memphis is active on social media and fancies himself as quite the rapper.

After the victory over the US, he took to Twitter and fired a hilarious shot at an interesting target, basketball legend Charles Barkley.

Why Charles Barkley and what’s the connection between the two? Well, it’s simple. Barkley, one of the stars of TNT’s Inside The NBA, recently guaranteed a USA victory over the Netherlands in the round of 16.

While the US played much better than the 3-1 loss would indicate, it did not, in fact, open a “can of whoop a**” on the Dutch as Barkley predicted.

Instead, the Netherlands moved on and will face Lionel Messi and Argentina in the quarterfinals, and Depay seized the opportunity to fire back at the Basketball Hall of Famer.

“Lotta bark, no bite,” he tweeted, with a picture of Barkley attached below.

The tweet was nothing more than some playful banter. But it did seem to upset some US fans.

CONGRATS ON BEATING AMERICA IN OUR MAYBE 4TH OR 6TH MOST POPULAR SPORT WITH OUR WORST ATHLETES GOOD JOB BRO https://t.co/UrH1BWY9un

A lot of barking from the guy that’s been a flop at every major club he’s been at lmao https://t.co/zzPueo189W

Very loud for someone who’s only played 3 games for Barcelona this season🤣🤣 https://t.co/YXUw4iUWh5 pic.twitter.com/mQKqPMRoit

Something tells us Depay won’t be overly bothered by the critics. Though he’s played sparingly for Barcelona, he’s an integral part of a Netherlands team looking to win the storied country’s first World Cup.