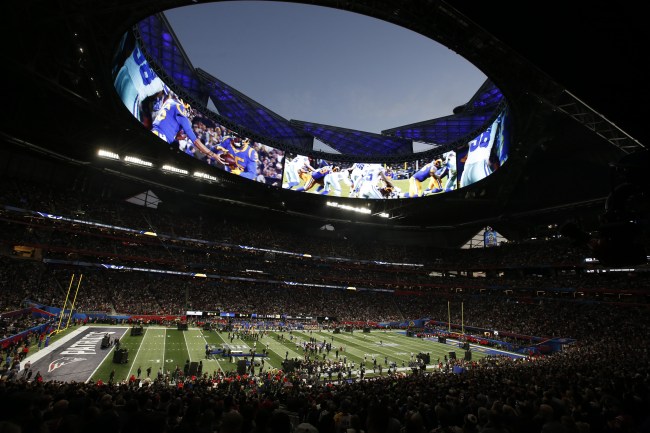 Atlanta’s Mercedes-Benz Stadium is home to the NFL’s Atlanta Falcons and the Atlanta United in the MLS who won the league last season. The stadium isn’t even two years old yet but it has already hosted the Super Bowl and the NCAAF National Championship.

It’s not uncommon for a new stadium to open and season ticket holders complain about how expensive everything is. The owners realize that the new stadium is a huge draw and they can raise prices on merchandise and concessions and people are going to pay those prices regardless of how high they are because they want to see their team in the new stadium.

The opposite has taken place at Mereces-Benz Stadium. Instead of jacking up the prices on concessions at the new stadium they’ve boasted the lowest prices in the NFL. And they just lowered those prices 11% below what they were last season to make them even cheaper.

Hot dogs are practically free now. Chips and Salsa is cheaper than a drink at the gas station. They might as well be giving this stuff away! I love it. 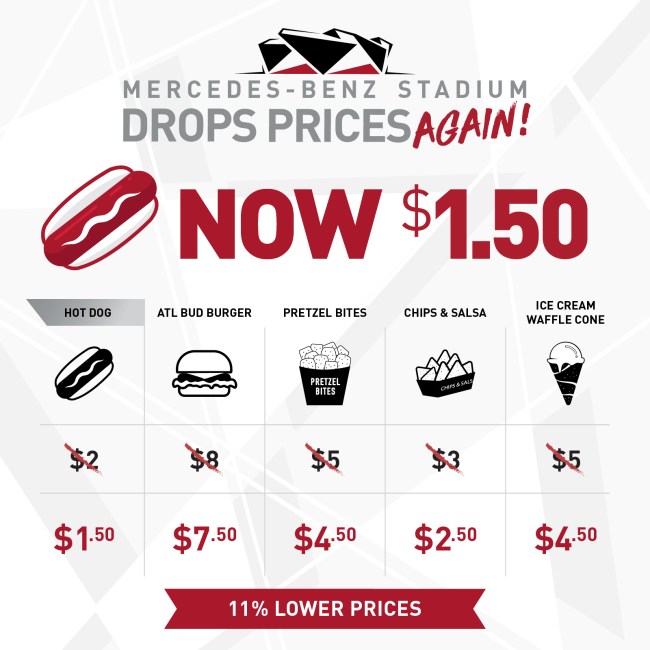 This is in conjunction with Mercedes-Benz Stadium moving to a cashless environment on March 10th, 2019. It will become the first NFL and MLS stadium to move to this stadium-wide cashless model and it’s being done alongside this epic price drop in the concessions.

These are the cuts announced by the team today (via WSBTV):

Hot Dog: $1.50 (was $2)
Pretzel Bites: $4.50 (was $5)
ATL Bud Burger: $7.50 (was $8)
Ice Cream Waffle Cone: $4.50 (was $5)
Chips and Salsa: $2.50 (was $3)
“Arthur Blank repeatedly challenges us to find innovative ways to further improve operations across our businesses,” said Steve Cannon, AMB Group CEO. “As we’ve always said, it is incumbent on us to listen and respond to our fans and we’ve heard that value, quality and speed of service are incredibly important; therefore, we’ve again made operational adjustments that address each of these areas. Our fans are our most important influencers and we want to ensure they have the level of service they’ve come to expect from Mercedes-Benz Stadium.” (via)

Dollar fifty hot dogs are so cheap it’s a promotion I’d expect to see at the local dog track here in Florida to get people in the stands on Fridays. It’s a promo you might expect to see from a Minor League Baseball team, not one of the best and newest stadiums in the world.

This is all fine and grand but the stadium needs to figure out their stupid ass partnership with Chick-Fil-A because the NFL games are played on Sundays, the day that Chick-Fil-A is closed, and fans are being deprived of that delicious Polynesian Sauce when it would be unbelievably easy for them to just open the damn restaurant for Falcons home games.