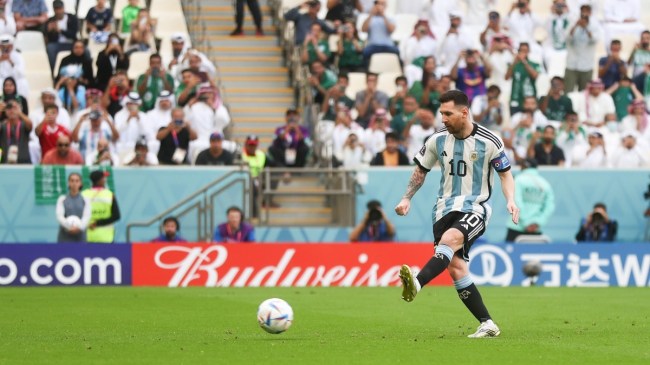 There’s so much you can say about Barcelona legend, current PSG talisman, and Argentinian legend Lionel Messi. The diminutive forward is regarded as quite possibly the greatest player in the history of soccer.  He’s won everything there is to win in a career, except the thing that matters the most: the World Cup.

This year’s edition in Qatar will be his last chance to win a World Cup, as the 35-year-old is approaching the twilight of his career.  If he wins the tournament for Argentina, it will be hard to say he isn’t the greatest of all-time.

And, it didn’t take him long to make an impact, as he found himself on the scoresheet less than ten minutes into the sky blue and white’s first opener against Saudi Arabia Tuesday morning.

After the Argentinians got off to a frisky start. Messi was looking active and likely to score.

It didn't take long for Messi to get a shot on goal ⚡️🇦🇷 pic.twitter.com/z3qa3ayw4H

Then, they drew a penalty off of this play. There appeared to be multiple fouls in the box.

"There was 2 holding fouls on this free kick situation." @DrJoeMachnik breaks down the penalty called against Saudi Arabia ⬇️ pic.twitter.com/5vrwNDY0YV

For those unfamiliar, any player on the field can take a penalty in soccer, not just the player that was fouled. Naturally, manager Lionel Scaloni went to his talisman. Messi delivered in the 10th minute with a classy penalty.

Classy penalty by Messi there, who sent the keeper the wrong way with his hips. And, the world’s second-most followed person on Instagram, behind Cristiano Ronaldo,

The fans lost their minds at Lusail Stadium in Qatar as they watched Messi score.

He almost scored soon after. But, he was ruled to be offside.

Messi was this close to having a second goal 👀 pic.twitter.com/2dBvJpQiCm

The goal was Messi’s 6th World Cup Goal. The record for most career goals at the World Cup is an astonishing 16 by Germany’s Miroslav Klose. This is Lionel Messi’s fourth World Cup.

As it stands, it won’t be hard to imagine the PSG man scoring a few more in this match.