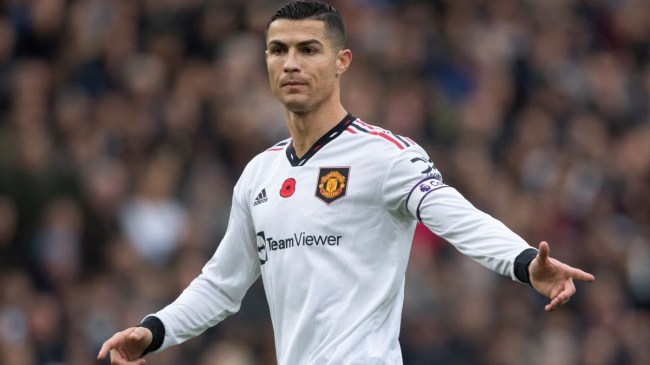 While Cristiano Ronaldo is with his Portugal teammates at the 2022 FIFA World Cup in Qatar, Manchester United is left trying to clean up the mess he made with his explosive interview with Piers Morgan. Ronaldo took shots at the club’s ownership, management, and even his teammates in the tell-all interview that left Portuguese teammate Bruno Fernandes unhappy.

But the trouble began long before Ronaldo gave the interview. The forward, who rose to stardom at Manchester United, fell out with the club and its management long ago. The issue came to a head in October when Ronaldo got in a public spat with Red Devils manager Erik ten Haag.

Now it appears the club is ready to move on from the petulant star.

The club addressed the situation on Friday morning with a small statement that really said nothing. But ESPN’s Rob Dawson followed with a report claiming that United could both terminate Ronaldo’s contract and sue the player.

United have waited until the full extent of Ronaldo’s comments were made public before deciding on their response, and after the final part of the interview with Piers Morgan was aired on Thursday in the UK, the club, according to sources, are seeking to end the 37-year-old’s contract, which runs until June. Sources added that United have appointed lawyers to explore the possibility of suing Ronaldo for breach of contract. – via ESPN

Ten Haag reportedly told United brass that he does not want Ronaldo back with the club. The Portuguese superstar reportedly makes in excess of £500,000. So clearing him off the books would be a huge coup for the Red Devils. Beyond that, it would help ten Haag cultivate a new attitude around Old Trafford.

What comes next for Ronaldo is anyone’s guess. But the way he’s leaving Manchester United can’t do much to help his value.