St. Louis Had To Face Both Jacob deGrom And Max Scherzer In Spring Training And It Didn’t Go Well 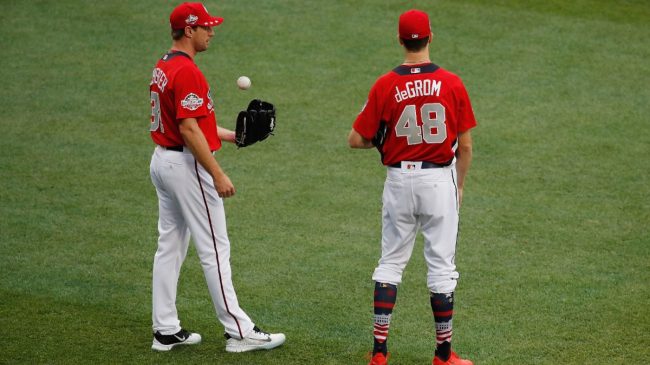 The Mets and Cardinals faced off Sunday in Spring Training action.

St. Louis hitters were faced with the hapless task of squaring off against both Jacob deGrom and Max Scherzer. Scherzer and deGrom figure to be the 1-2 punch in New York’s heavy hitting pitching rotation. They’ve proven themselves to be two of the league’s top arms year after year.

Together, they’ve won four of the last six NL Cy Young awards. Scherzer also completed the feat in the American League as a member of the Tigers.

Now, they join forces to form the most intimidating duo in baseball.

Typically, you wouldn’t see both deGrom and Scherzer on the same day as they’re both starting pitchers.

But Spring Training is not typical.

It’s here where teams begin to mess with their rosters, shuffle lineups, and prep players for the upcoming season. So, when manager Buck Showalter wanted to see both players in action, he used Sunday’s matchup with St. Louis to get a glimpse of his two top arms.

And they put on a show.

St. Louis was on the losing end of this tough matchup. Facing two of the most dominant arms in baseball is never fun.

It was deGrom who landed the start, throwing three innings as the Mets continue to manage his usage following last year’s injury.

The righty struck out five batters, allowing one run on four hits. He struck out the side in the first inning for a second straight game.

That’s when he gave way to Scherzer, who tossed the final six innings to earn the save. The flamethrower struck out seven hitters, allowing two runs on three hits.

They combined for 12 strikeouts to just one walk. St. Louis hitters had no shot.

When the game ended, social media erupted with reaction to the impressive performance from New York’s aces.

Jacob deGrom, K'ing the Side.

The Ripper with his first stabbing of the year! 🔪 pic.twitter.com/5H4JYbJQZt

Jacob deGrom continues to be on another level.

He struck out 3 in the first inning again. pic.twitter.com/f4dlX7esnR

Some deGrom filth for your timeline. pic.twitter.com/hwOsqDiNgJ

.@Max_Scherzer out of the 'pen following deGrom is just unfair. pic.twitter.com/SIPpf4Lvzw

Jacob deGrom and Max Scherzer pitching in the same game for the Mets todaypic.twitter.com/uxIJ6q9Li0

Jacob deGrom has pitched three innings so far this Spring. He has struck out eight batters. It appears that he is still quite good at throwing a baseball.

“It was a good day for the Mets, for sure,” Hefner said.

The Mets should feel good about the preseason performances from their two aces. New York kicks off its season on April 7th with an opener against Scherzer’s old team, the Nationals.