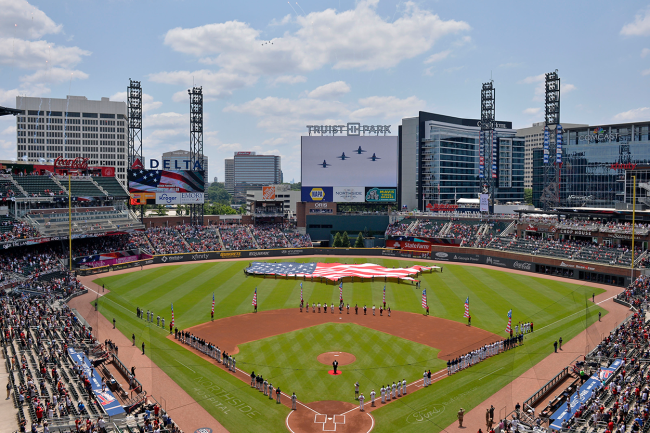 There are very few traditions in sports that are as uncomfortable as the ‘Kiss Cam.’ It never fails to create awkward moments, but for some reason, we as a society have just accepted it because of the hilarity it often brings.

That was certainly the case as the Mets visited Atlanta to take on the Braves earlier this month. The in-stadium video team did a New York fan so dirty and it was laugh-out-loud funny.

On July 8, 1980, Dodger Stadium unveiled the world’s first stadium video screen. It was 875 square feet of video in full color and it led to the creation of the ‘Kiss Cam’ when a cameraman zoomed in on a man and a woman who kissed as the crowd went crazy.

In that moment, a cultural sensation was born. Today, the ‘Kiss Cam’ is part of the standard sports experience, especially at baseball games.

A viral TikTok video from the Braves game earlier in July of the moment shows the vicious move in its entirety. Things start out normally until the camera switches to a single Mets fan.

The loving, happy music that was playing over the speakers as couples shared their love on the big screen immediately cut out when the camera switch. It gave way to Akon’s smash hit ‘Lonely’ as it showed the New York fan, who took a second to realize what was unfolding.

He didn’t know what to do and the man behind him even tried to console him with a shoulder massage. It didn’t work. The Mets fan looked so sad, until he eventually snapped to it and popped his jersey, which led to a smattering of boos.

The Braves did the poor guy so dirty, but I’ll be damned if it wasn’t funny!