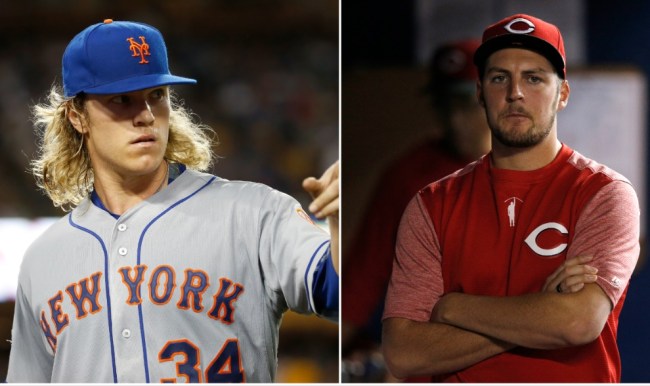 Pitchers Noah Syndergaard and Trevor Bauer were on the verge of becoming teammates in New York this offseason but after months of rumors, Bauer eventually decided to sign with the defending World Series Champion Los Angeles Dodgers.

Nearly a month after Bauer turned down the Mets, a salty Syndergaard randomly took a shot at the reigning National League Cy Young Award winner on Twitter.

And then he said……”I’m sorry I chose another team but I’ll donate to your charities!” https://t.co/Kxkje5Uqn2

Bauer saw Syndergaard’s tweet and immediately fired back at the Mets pitcher.

When mistakes are made, you try to make them right. I know you wouldn’t know anything about making mistakes though. Hope rehab is treating you well. Was good to see you back throwing. https://t.co/MI0Clq567u

Also, @Noahsyndergaard, try to treat the fans better. They’re what makes our game go. No place for personal insults, especially about someone else’s wife. pic.twitter.com/I3FaZbR224

Update: Syndergaard and Bauer are still going at it.

See you at the bottom https://t.co/AdzcBodu5h

You bring a drone and your mixtape and it’s a deal. #takeajokebro https://t.co/iAPPv3Kj0e

You’ve got yourself a date 🤝 https://t.co/B6xAOmEu8j