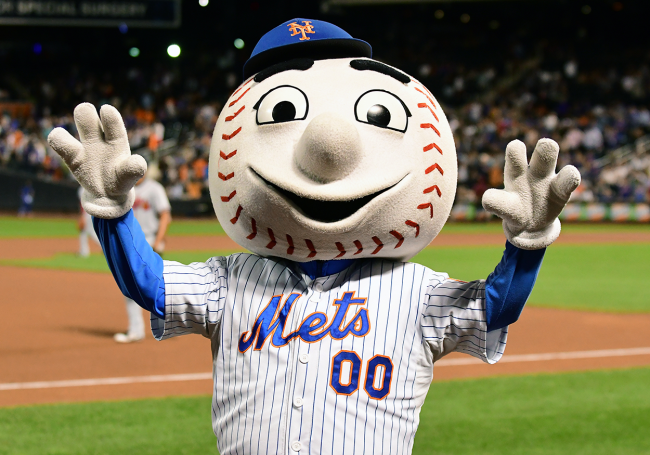 The New York Mets did a crosstown rival so dirty on Tuesday night. Not only did they win the first game of a two-game, midweek Subway Series, but they pranked a Yankees fan into getting a face full of cream— either whipped or shaving.

Now, the Bronx Bombers fan was either:

The prank was simple. The Yankees fan was broadcast on the jumbotron in centerfield and was asked to identify various Yankees both current and past. However, the twist was that they all had beards, long hair, or both, that was intended to make them “unrecognizable.”

As the fan was cruising through the different players, he had no idea what was coming. He did not win the grand prize, but he did win a prize. Just one that he didn’t want.

“Here is your prize,” said the in-stadium emcee, as Mr. Met made his way around the corner with a pie plate full of either whipped or shaving cream.

Mr. Met then proceeded slam the pie plate directly in the Yankees fan’s face and left him covered in cream. It was brutal.

Wtf are the mets doing lmao… bruh the violation to homie at the end lmao me and mr met would have to be shootin the fair one after that real talk 🤣😂 pic.twitter.com/5Ee1LUYOLS

Again, the Yankees fan must have been okay with what to come. Otherwise, he must be a transplant, because no true New Yorker would allow Mr. Met to do him so dirty like that. A real New Yorker is throwing hands— but, to give the benefit of the doubt, maybe this guy was just trying not to catch a charge.