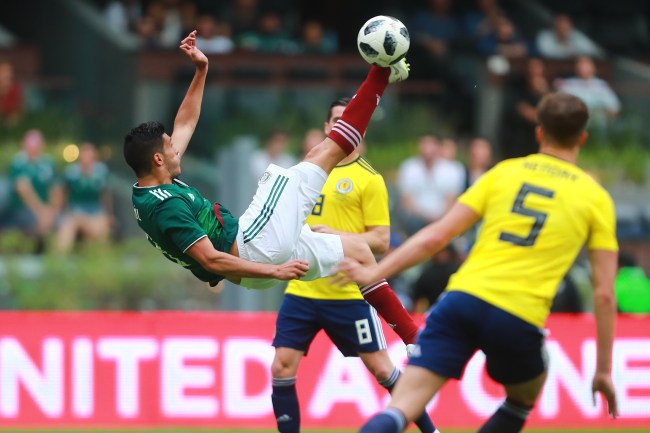 The Mexican National Team is off to Copenhagen for their final warm-up game before the 2018 World Cup. They beat Scotland 1-0 in a friendly at Estadio Azteca in Mexico City last weekend and now reports are coming out that the team partied their asses off for 24-hours after the game.

The alleged party went from Saturday, after the 1-0 win, through 4pm on Sunday and the 24-hour lock-in is reported to have taken place with 30 ‘VIP’ prostitutes/escorts in attendance. This report comes from the Mexican magazine TV Notas which claims the team was given the night off after their 1-0 win versus Scotland.

Here’s what The Sun UK is saying about this:

The magazine, whose report was widely echoed last night by Mexican and South American media, quoted a source as saying:
“They arrived at the house in Las Lomas around 10.30pm on Saturday and had a great time with music, drinks, games and women.
“They had the night off, without their wives and girlfriends.”
The unidentified insider, asked why their partners had not been at the party, told TV Notas: “Because they wanted to be a bit naughty.
“Why else would they have needed 30 escorts!” (via)

I don’t know this publication, TV Notas, but it certainly looks like a tabloid to me. With that said, just because it’s a tabloid there’s no reason to assume that these reports aren’t credible, especially given how widely this is already being reported.

Mexico’s opening match in the 2018 World Cup is in Group F against Germany, the defending World Champs. So they will certainly need to try and move on from this story and start focusing on the game if they want any shot in hell at beating Germany.