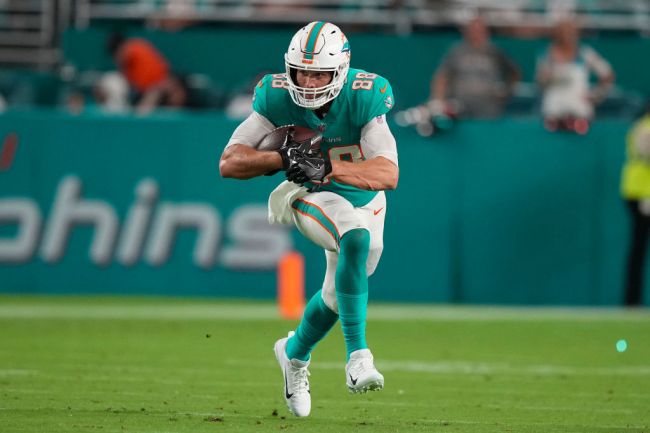 The Miami Dolphins made some big changes on the offensive side of the ball this offseason. They replaced the defensive-minded Brian Flores with former 49ers offensive coordinator Mike McDaniel as their new head coach.

The Dolphins signed Chase Edmonds to leas their backfield and traded to Tyreek Hill to give Tua Tagovailoa an elite option to throw to.

Now, it looks like they may not be done making changes to that offense.

According to a report from PFF’s Doug Kyed, the Dolphins have been bringing up Mike Gesicki in trade talks.

The Dolphins have brought up Mike Gesicki in trade talks, per @DougKyed

Check out other potential surprise trade and cut candidates https://t.co/MFaTg90xLc

Gesicki is currently expected to play the upcoming season on the franchise tag after putting together one of the best seasons of his career in 2021. He set career highs last season in targets, receptions, and receiving yards. He turned 112 targets into 73 catches for 780 yards. However, he could struggle to replicate his numbers in 2022

With the Dolphins adding Tyreek Hill and Chase Edmonds this offseason, there is going to be a lot more competition for targets.

Gesicki has also reportedly been trying to fit into a new role with the team as he is expected to block more in the new offense after operating mostly as a receiver over the past couple of seasons.

The Dolphins seemed to have found their replacement for Gesicki last season when they drafted Hunter Long, but long didn’t play much as a rookie and the Dolphins decided to hold on to Gesicki for another year with the tag.

Despite the fact that the regular season is only a few weeks away, there are sure to be some teams out there who would be interested in adding Gesicki’s combination of size and athleticism.

Maybe the Dolphins have one more blockbuster trade up their sleeve before the season starts.