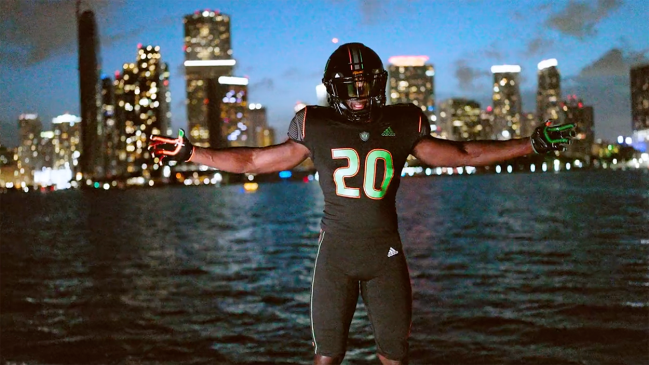 Over the course of the last 20 years, Adidas has made some of the worst alternate uniforms both on the gridiron and on the hardwood. That is not the case with the jerseys that the University of Miami football program unveiled on Friday.

Miami, of course, is best known for palm trees, warm weather, Art Deco architecture, pristine beaches, deep-rooted culture and nonstop nightlife. When the sun goes down, the party comes out.

And with the party, especially on South Beach, comes neon lights.

That is the general premise of the Hurricanes’ new kits and they are awesome. Adidas didn’t totally screw them up!

As head coach Mario Cristobal enters his first season at the helm, there is a lot of hype in Coral Gables about what he has cooking. In turn, a lot of swagger is starting to return to “The U” and their new ‘Miami Nights’ uniforms are no exception.

They bring the neon flair that can only be found in Miami and pays tribute to the South Beach vibe with orange and green neon piping from the helmet to the cleats that really stands out amidst an otherwise all-black look. Although the program has not announced when the new uniforms will be worn this fall, but when they do, the Hurricanes will be the best looking team on the field. They are fresh.

Take a look at the video that was released on Miami’s official Twitter account. It features every aspect of Miami, from the sunset, to the skyline, to the yacht culture, to the neon lights, of course.

Congratulations to Adidas for getting something right. These are awesome.