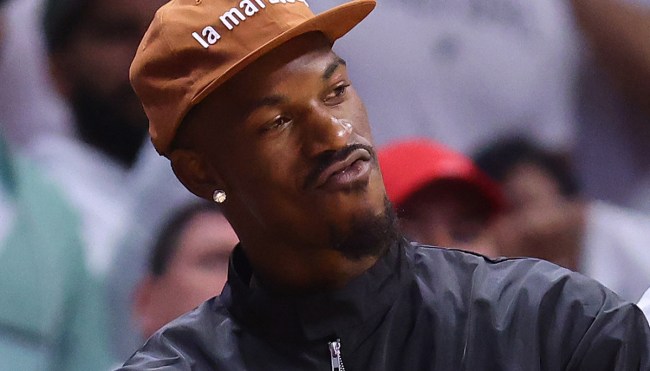 If the amazing bench mob celebrations we’re treated to whenever March Madness rolls around have taught us anything, it’s that the best way a player can contribute to their team when they’re not on the court is going H.A.M. on the sideline whenever the occasion calls for it.

That was about all Jimmy Butler could do when the Heat faced off against the Hawks on Tuesday night after a knee injury prevented him from playing in the fifth game of the first-round showdown between the two teams.

It was certainly a less than ideal situation for a Miami squad that had heavily relied on the guard over the course of the first four games, as Butler’s stellar performance—including the playoff career-high 45 points he posted in the second contest—was one of the biggest reasons they came into a game with the chance to put the series away.

The Heat were ultimately able to do exactly that by walking away with a 97-94 victory, and while Butler may have been sidelined, he was still able to provide plenty of moral support and celebrate alongside his teammates with moves like this one he pulled out after a bucket Max Strus drilled in the second quarter.

It appears the NBA was not too thrilled with that particular display, as ESPN reports Butler was hit with a $15,000 fine for what was deemed an “obscene gesture.” However, the league didn’t stop there, as it also fined the organization another $15K for posting a GIF of the air hump in a now-deleted tweet.

They also fined the Miami Heat organization $15K for making a GIF out of it 😂 pic.twitter.com/ltZp8hNYIB

That’s what you get for not stopping at two pumps.