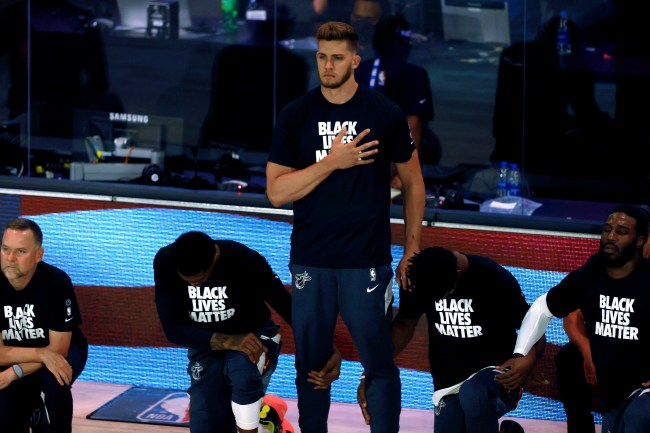 Orlando Magic’s Jonathan Isaac was the first NBA player to stand during the anthem while inside the NBA bubble but he’s now not the only player to do so.

On Saturday afternoon, Miami Heat’s Meyers Leonard decided to stand during the anthem while wearing a Black Lives Matter t-shirt.

Meyers Leonard only Heat player standing during the anthem pic.twitter.com/fSblsS4Ndp

Meyers spoke to Tim Reynolds of the AP and said that he decided to stand because his brother is a Marine.

Meyers Leonard has a brother who served two tours in Afghanistan with the U.S. Marines. He carries a military-themed backpack, wears combat boots and has a phone loaded with Navy SEALs who are his friends.

He also makes this clear: “I absolutely believe Black Lives Matter,” he said.

Still, Leonard simply could not bring himself to kneel for the national anthem.

Wearing a Black Lives Matter T-shirt over a jersey that he ordered to say “Equality,” and as all other coaches and players around him knelt, Leonard stood for the playing of “The Star-Spangled Banner” on Saturday before the Heat re-opened their season by facing the Denver Nuggets at Walt Disney World.

Meyers would later expand on his reason to stand on Twitter.

Today, I listened to my heart. I felt an overwhelming amount of emotion as I stood there during the National Anthem. My brother, and many close friends have sworn to protect this country at all costs, and that means something to me, as does the flag and our nation. pic.twitter.com/eGJrWNIUvk

The Black Lives Matter movement also means a hell of a lot to me. What has been and continues to go on in our country is inexcusable and flat out wrong. I will continue to use my voice, my platform and my family’s resources to commit to helping make a change.

I’m incredibly thankful for the love and support from my teammates, the Miami Heat organization, my family, and friends who know me. They know my heart and where I stand. I’ll leave you with this – it’s OKAY to be BOTH. I can stand proud in my beliefs and also support BLM. 🙏🏼❤️🔨