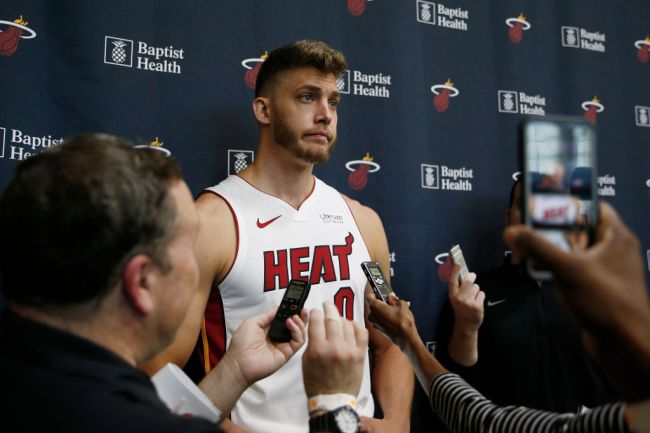 The NBA has announced its punishment for Meyers Leonard and fans feel like the Miami Heat power forward got off easy.

Earlier this week, Leonard was seen blurting out an anti-Semitic slur while playing “Call of Duty” during a live Twitch stream.

On Thursday, the league announced they were fining Leonard $50k, suspending from all Heat facilities and team activities for one week, and requiring him to attend diversity training.

Leonard will also be required to participate in a “cultural diversity program.”

Here is the full news release, which includes a statement from Commissioner Adam Silver: https://t.co/I0QWNozHQ7 pic.twitter.com/YgugEyyVX8

“Meyers Leonard’s comment was inexcusable and hurtful and such an offensive term has no place in the NBA or in our society,” “Yesterday, he spoke to representatives of the Anti-Defamation League to better understand the impact of his words and we accept that he is genuinely remorseful. We have further communicated to Meyers that derogatory comments like this will not be tolerated and that he will be expected to uphold the core values of our league — equality, tolerance, inclusion and respect — at all times moving forward.”

While $50k is the largest fine Leonard cold inquire due to the CBA, fans still felt he got a slap on the wrist.

We are now in a world where NASCAR has become the voice of reason in punishing their own for racist comments. https://t.co/xrCB5n4psW

This is the equivalent of me being fined $170 by my employer (based upon % of yearly earnings). $50K sounds like a lot, but it is figurative peanuts to a contracted athlete like Leonard. That fine is a pittance, as is a week suspended. #nba #MeyersLeonard #whatajoke https://t.co/jn4k0FZkmL

Meyers Leonard has played three games all season. Being suspended from team activities for a week isn’t much of a punishment. The $50,000 fine is also in line with what Irving and Harden got fined for partying during the pandemic.

Ah yes, 50k of his multimillion dollar salary and a one (1) week suspension will totally teach him

Disappointed but not surprised https://t.co/63bJqn1QSi

The more this sits w/me, the more upset I get. The NBA fined Meyers 1/180th of his salary & told him he couldn't waive his pom-poms on the sideline for a week. What kind of precedent does this set? https://t.co/4MYIZ5yF3M

This is why no one takes sports leagues serious when it comes down to punishments. You get suspended longer for PED/Weed (in the past)

Than for beating women, using racist/hateful speech remarks. Or even DUI accidents. https://t.co/OBFKFgbEgm

Your regular reminder that people who act in anti-Semitic ways are so often given a slap on the wrist and it's forgotten within a couple weeks. Would people be okay with this if he'd said the n-word? https://t.co/qDc5q9LsIQ

Not good enough. He knew exactly what he was saying, it’s clear from the video. A slap on the wrist is hardly going to incite change. https://t.co/SyabBMatzQ