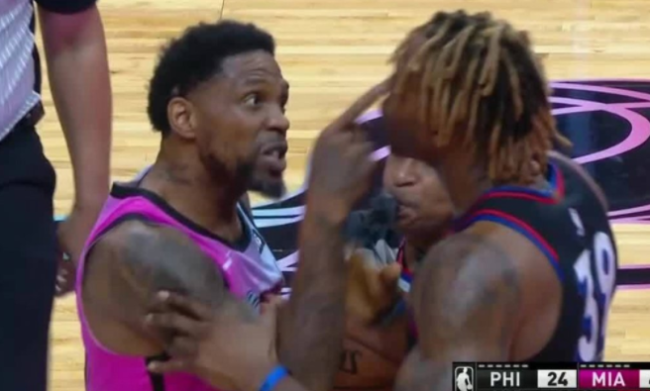 40-year-old Udonis Haslem made his first showing of the season a memorable one.

During Thursday’s Sixers-Heat game, Haslem checked into the game for the first time this year and quickly scored four points.

THE LEGEND GETTING BUCKETS ⚓️ pic.twitter.com/NpErUaEu1T

Three minutes his first game of the season, Haslem got ejected after pointing his finger at Dwight Howard’s face after a heated altercation.

UD got ejected after getting into it with Dwight 👀 pic.twitter.com/DwLaSi1Dk6

Cant make it up. 40-year-old Udonis Haslem gets off the bench for the #Heat for the first time all season and in 3 minutes he makes 2 buckets and then got ejected. pic.twitter.com/6zNAntClpZ

Update: Haslem spoke to the media after the game and he seemed pretty pleased with himself.

“If this is the last one, I finished it the only way Udonis Haslem could, with an ejection.” pic.twitter.com/Ey32ei9jkI