Swag U Is Back! Miami Hurricanes Bust Out New Turnover Chain And Touchdown Rings During Game Vs Florida Gators 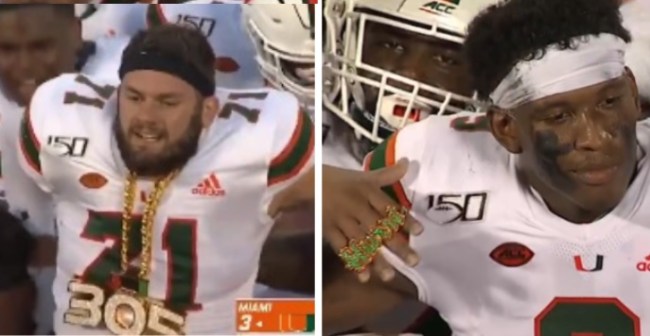 The Miami Hurricanes football team busted out some new bling for tonight’s game against the Florida Gators.

Before tonight’s game, the Canes introduced their new 2019 version of the Turnover Chain and it’s absolute fire.

Nothing more Miami than this. 😏 pic.twitter.com/ZUghLWurNk

Not only did the Canes show off a new turnover chain but they also introduced the touchdown rings.

💍 WE GOT SOME REALLY BIG RINGS 💍

The Canes put the chain and rings to good use in the first half after they got two turnovers and a touchdown.