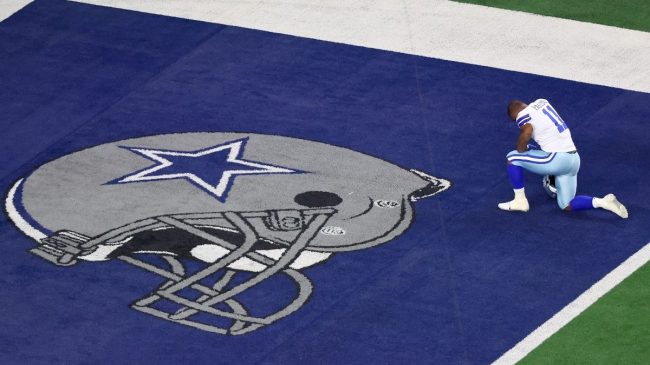 Professional athletes are getting much more involved with the media, thanks to podcasts. However, it sounds like the Dallas Cowboys star Micah Parsons would be doing something similar to the Buffalo Bills QB Josh Allen.

Parsons was in line to appear on Undisputed with Shannon Sharpe and Skip Bayless, however, he no-showed his debut appearance.

Freezing Cold Takes found some tweets regarding the issue. First, Skip Bayless made the announcement that Micah Parsons would appear on Undisputed every Tuesday throughout the regular season. Josh Allen has a similar setup with Kyle Brandt, as he’s made frequent appearances every Tuesday on Kyle Brandt’s Basement.

However, according to the New York Post, Fox Sports 1 was unable to reach Micah Parsons for his debut appearance. Perhaps the brutal loss to the Tampa Bay Buccaneers deterred the Cowboys star altogether.

We’ll see if Parsons is completely finished with Undisputed or not. There is a chance he shows up next Tuesday but we’ll have to wait and see.

It’s an odd occurrence, as Micah Parsons is likely getting paid to appear on the show. But for whatever reason, the Cowboys ghosted Fox Sports 1 without a word.

At the end of the day, Parsons has bigger fish to fry. Dallas is in a whirlwind of trouble right now after Dak Prescott fell to injury.

Even so, the club seems optimistic that he’ll return much sooner than originally expected. Micah Parsons is going to have to do everything possible to keep the Cowboys competitive, as the offense is going to struggle these next several weeks.