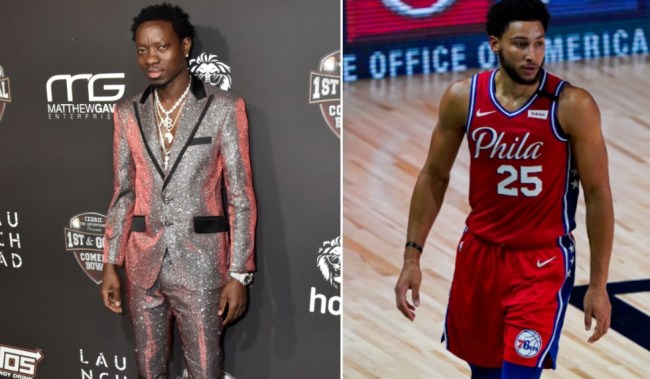 Last month Blackson took to Twitter to take a shot at an unnamed player on the Sixers for sliding in his girlfriend’s DMs.

During an interview, Blackson revealed he was talking about Simmons in the tweet and went on to describe how angry he was with Ben, who he once considered a close friend, for violating his trust by trying to get with his girlfriend.

“Me and Ben had a falling out…Not too long ago Ben was in my girl’s DMs. Here’s the thing, me and this guy were so cool and so close, I threw girls at him, I hooked him up and this guy was still in my woman’s DMs. She didn’t want to tell me because she knew was friends but she had no choice but to tell me. Even when that happened, I stopped communicating with him, I didn’t want to distract him from his play and I’m like if they win this series I might forgive him but then I lose and I went and started killing his ass. i tweeted about it.”

Blackson made news this weekend when he proposed to his Instagram model girlfriend Miss Rada during on appearance the Breakfast Club radio show.

Aww, Michael Blackson purposed to his boo on The Breakfast Club pic.twitter.com/3bT4M3qgsq

Simmons on the other hand has been seen traveling around the world with his new girlfriend Maya Jama.