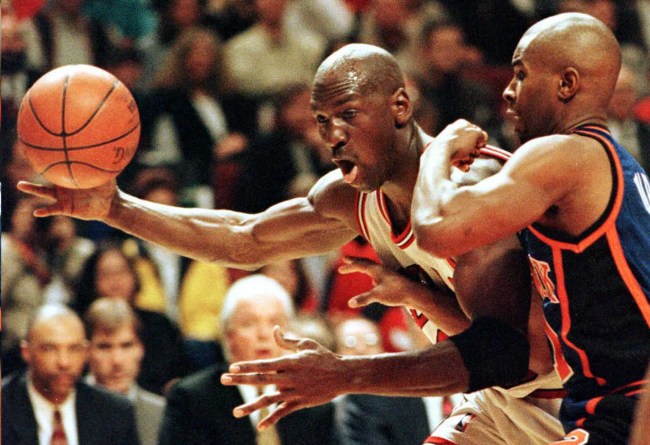 Of all the great moments that Michael Jordan gave us over the years, one of the most defining is the image of him laying on the ground inside the Chicago Bulls locker room after winning the NBA Finals in 1996. As we all know, it wasn’t MJ’s first title, nor was it his last, but it seemed to be the most important one — because it was the first one he won without his dad, James Jordan, watching, and he did it on Father’s Day.

The video of Jordan rolling around, clutching the game ball in hand, still sends chills down sports fans’ backs, as the version of MJ weeping was played during a recent episode of The Last Dance, which just hit differently than the one either muted or played with music on top of it. Take a look below as a refresher of the pure emotion Michael Jordan had after winning title No. 4 in 1996.

I’d seen this video clip before but never heard the audio of him sobbing. That hit different #TheLastDance pic.twitter.com/kXFwvkXr6H

The image itself is iconic, and shows the vulnerability of a guy, Jordan, who rarely gives the public a glimpse of that side of him. But there’s something else fans remember leading up to that moment of MJ in the locker room — his Bulls teammate at the time, Randy Brown, trying to wrestle the ball away while Jordan cried and celebrated on the floor immediately after winning the championship.

At the time, many people probably wondered what in the hell Brown was doing, and they still might be asking that same question, with the role player clearly interrupting MJ’s emotional moment. To better explain himself, though, Randy Brown recently talked to Darnell Mayberry of The Athletic to describe exactly what he was doing, and why he tried like hell to wrestle that game ball from Michael Jordan’s arms.

“A lot of people aren’t aware that Michael took me under his wing and constantly told me he’d get me my first championship at home in Chicago,” Brown said. “He loved the fact that I wasn’t as talented as he was but I was just as competitive. That’s why he and I wrestled for that Finals game ball. Being competitive at all costs.”

“I came to my senses and realized the game was played on Father’s Day and M.J. deserves to have that moment,” Brown said. “I always was and always will be a team player.”

It’s a pretty interesting claim from Randy Brown, and a story that would be cool to hear from Michael Jordan — because his recollection of the iconic moment may be different. Still, if nothing else, The Last Dance has shown how Jordan used to really push his teammates, even riding them so hard that he (allegedly) didn’t even let one eat a postgame meal after a bad game, so it kind of makes sense that Brown wanted to compete for the game ball with MJ after winning the ’96 title.

Luckily, in his own words, Brown came to his senses and realized the moment was bigger than basketball, and that Jordan was caught up in the significance of that championship coming on Father’s Day. At first glance, though, it sure seemed like the backup guard was just trying to be a pest and keep the ball for himself.