Michael Jordan Disrespected Kobe Bryant So Bad To His Face In 2003, Kobe Went Into Full Psychopath Mode To Exact His Revenge 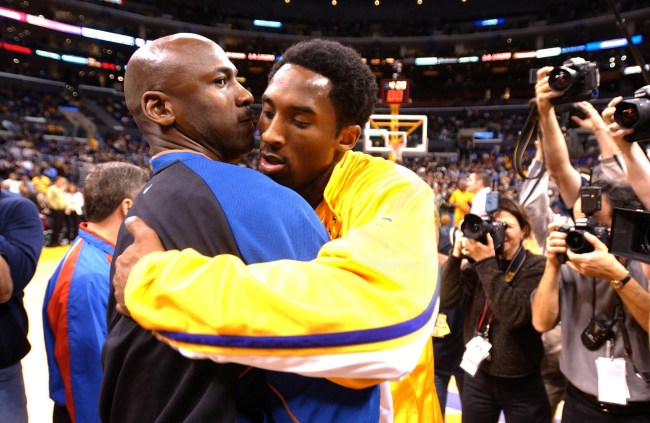 Kobe Bryant is a psychopath (well, not really, but you get what I’m saying). Kobe’s intensity and insanity have been well-documented. He is manipulative, self-absorbed, lacking the gene for empathy, ruthlessly competitive. These characteristics, which could easily be described to profile a serial killer, contributed to his status as a top-3 shooting guard of all-time.

Gilbert Arenas recently added more evidence to the Black Mamba’s (a nickname he gave himself, another psycho move) sociopathic mentality by recalling a brief exchange between Kobe and Michael Jordan in 2003 that sent Kobe into killer mode.

Arenas recalled on “The No Chill Podcast” that Jordan’s Wizards beat a then 24-year-old Bryant’s Lakers 100-99 during a November game in Washington D.C. Jordan dropped 25 on 9/14 shooting and Bryant shot an underwhelming 8/21 in the loss.

After the win, Jordan approached Bryant, who was wearing Jordan branded shoes at the time, and said: “You can put the shoes on, but you never gonna fill ’em.” Yikes.

Legend has it that Kobe didn’t talk to his team for two weeks, going completely silent as he mentally prepared for the rematch, which took place on March 28 at Staples Center.

Jordan would go on to retire after that season, but not without Kobe getting revenge on the GOAT.

Listen to Arenas tell the story and watch highlights of Kobe going entirely unconscious during the rematch game below.

“Kobe Bryant was a f**king psycho”

Gilbert Arenas tells us the story of what led to @KobeBryant scoring 55 against MJ and the Wizards that night 😳 Mamba was a sicko. More stories 👇🏽

I hope Kobe and MJ’s brains are donated to science when they pass.