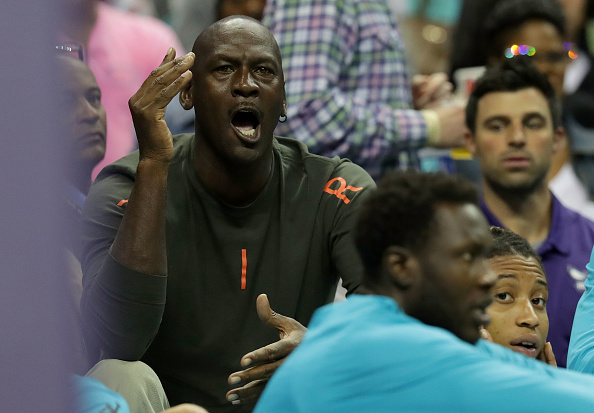 At the end of tonight’s Hornets-Pistons game, Hornets guard Malik Monk nearly cost his team the game when he earned himself a technical after celebrating on the court with .3 seconds left in the game after Jeremy Lamb’s go-ahead bucket.

Jeremy Lamb FOR THE WIN pic.twitter.com/WXicx2nSOW

Here’s Jeremy Lamb’s 3 pointer to put the #Hornets up 2. You can see Malik Monk run on the court in excitement. Results in a tech. pic.twitter.com/niyHXm2B4C

Replays show Malik Monk ran onto the court after Jeremy Lamb's shot. Pistons gets a technical free throw with 0.3 seconds remaining and Langston Galloway hits it, but #Hornets hold on to win 108-107. Wow. What an ending.

Hornets owner and all-time NBA great baller Michael Jordan was on the sidelines watching the game and was not happy with Monk.

Watch as MJ chastises and slaps Monk in the back of the head for his dumb tech at the end of the game.

#Hornets owner Michael Jordan wasn't too happy with Malik Monk after he ran onto the court before the game was over and got called for a technical 😭😂@WCCBCharlotte pic.twitter.com/575UlSeZNz

Monk had a hilarious reaction to the video of MJ slapping him on Twitter.

imagine fucking up and the greatest player of all time is the one to tell you you're fucking up. he received .04% of the treatment Kwame Brown got

Thankfully the Pistons weren’t able to score because Jordan may have killed Monk on the sidelines if that would have happened.