Michael Vick Compared His Comeback To Colin Kaepernick, How Hard It Was For Him After Missing Just 2 Years 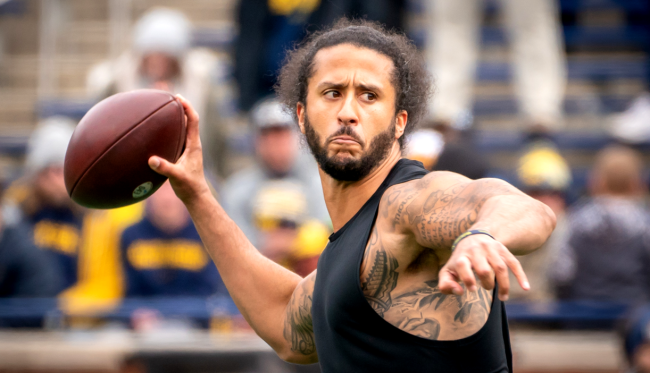 Michael Vick, who knows a thing or two about trying to come back and play quarterback in the NFL after being away from the game for a long time, recently shared his thoughts on Colin Kaepernick.

Vick, who missed two full seasons in the prime of his NFL career because he was either suspended or in prison for his part in a illegal dog fighting ring, is one of the few people who can relate a little bit to Colin Kaepernick trying to make a comeback.

The current Fox Sports analyst, who almost made another comeback with the Fan Controlled Football League this spring at the age of 41, spoke to OutKick 360 about Colin Kaepernick’s situation.

“I think it’ll happen in due time,” Vick predicted.

Kaepernick has been out of the NFL since 2016, four more years than Vick missed, but he also hasn’t spent any of that time in prison so he’s been able to continue to try and stay in football shape.

“I think the biggest thing for me was physically being able to perform, especially the first year I was back,” Vick said when asked what the hardest part about his comeback was. “I took it for granted. I really thought that I would be able to come back into the game and play the game at a high level and not miss a beat, that everything would flow smooth, but I found out really quickly that the game was way faster, offenses were a little more complex, and that I really had to take that year off, in football, to get my strength and conditioning back up. So I needed some time off because it’s just different movement, it’s different than when you’re just working out. You show up one day, you just work out and you throw the football around and drop back… it’s a little more rigorous.”

Vick doesn’t believe Kaepernick can’t do it, “it’s just going to be a little tough.”

He also added out that Colin is still only 34 so he’s “got some good years left.”

“He’s been out the league a couple years and he hasn’t played in a long time, it probably would be smart to just come in in a backup role, and just play that backup role for another two or three years,” Vick continued. “And, when you get an opportunity to start, you show that you can play. You win a series of games. You win five or six games then maybe someone will be looking at you in terms of bringing you in and giving you a chance to compete for the starting job. But you know, everything in the NFL has to be earned and I think Kaep understands that.”