Michael Vick Is Not Coming Out Of Retirement To Play Fan Controlled Football: Fans React 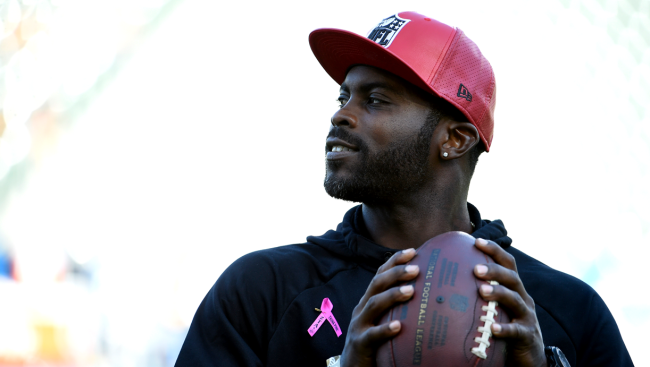 After running a 4.72 40-yard dash last spring and throwing a football clean out of a stadium earlier this month, it wasn’t terribly surprising that Michael Vick was rumored to be coming out of retirement.

After all, Michael Vick is still just 41 years-old (or three years younger than Tom Brady) and 48 year-old Terrell Owens has been catching touchdowns in the Fan Controlled Football League, so why not?

Vick, who last played professional football in 2015 for the Pittsburgh Steelers, was reportedly set to join the Fan Controlled Football League this week and make his debut on May 28.

Turns out, however, that report was erroneous… at least according to Michael Vick.

On Sunday, in a short Twitter thread, Vick wrote, “I hung ‘em up in 2015 never to return again. Had an amazing time and accomplished so much. I say that to say, they’re going to stay hung up and I will not be coming out of retirement. I appreciate the opportunity to play but I’d rather put my executive hat on with the little ownership that I have!”

I hung ‘em up in 2015 never to return again. Had an amazing time and accomplished so much. I say that to say, they’re going to stay hung up and I will not be coming out of retirement. (1/2) pic.twitter.com/gKShE54z3a

Vick did play in the American Flag Football League in 2017, a seven on seven league, as the leader of Team Vick. That team’s first game was played against Team Owens at Avaya Stadium in San Jose, so Vick playing in the Fan Controlled Football League would have been the second time the two former NFL stars had competed against one another since retiring.

Vick was also the offensive coordinator for the Atlanta Legends of the short lived Alliance of American Football.

Numerous football fans expressed disappointment in the news that Vick was not coming out of retirement.

Awww man... bro I know you better than half these qbs in the game now and that's facts.. definitely respect your decision though. Your eagles jersey will always stay hung up in my man cave

I would have LOVED to see you play. I'm saddened that you changed your mind. However, it's a LONG time between NOW & "NEVER". I'm still HOPEFUL that you'll return even if it's just for a game or two...

You're one of the best to do it on the gridiron 🏈 especially at your position. You brought so much excitement and 🔥 to the game. Glimpses of your game is still being imitated through every QB that enters the league. You're a Hall of Famer in my book. God bless you and your fam!