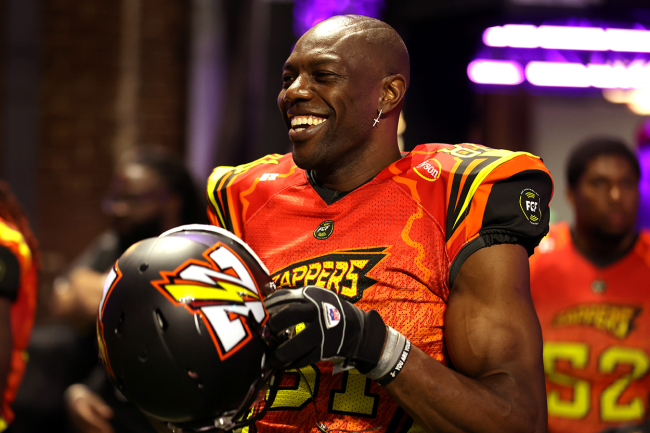 Terrell Owens may be 48 years old, but he is still catching touchdowns. After joining the Fan Controlled Football League for its second season, the NFL Hall of Famer continues to put on a show.

In Owens’ first game in the league, he was mic’d up and proceeded to call his own shot before ‘Mossing’ a defender for his first FCFL-career touchdown. In his second game with the Zappers, he was on the receiving end of a deep ball from Johnny Manziel.

On Saturday night, he found the end zone again.

Prior to the game, Owens spoke with the league’s on-field reporter and shared the advice that Chad Ochocinco gave him prior to the game. Of the receivers to ever play in the NFL, T.O. and Ocho are widely considered the most entertaining.

The latter, though certainly not alone, would often take Viagra before games to get his blood pumping.

Ochocinco suggested that Owens do the same before playing his third game in the Fan Controlled League.

Terrell Owens shares some interesting advice that @ochocinco had for him as he approaches tonights' game.

Whether he did or didn’t is unclear, but either way, it worked out. Earlier in the drive, Owens converted a 4th-and-7.

And then Owens ran a route over the middle of the field and out-muscled his defensive back for the touchdown.

On the passing end of the score was also a familiar face. Kelly Bryant, who played at Clemson before being replaced by Trevor Lawrence and transferring to Missouri, dropped it in for six.

He made his FCFL debut on Saturday and actually played pretty well.

Nothing was stopping Kelly Bryant from picking up this HUGE first down pic.twitter.com/3jypWdXNTm

Despite Owens and Bryant’s best efforts, however, the Zappers lost.