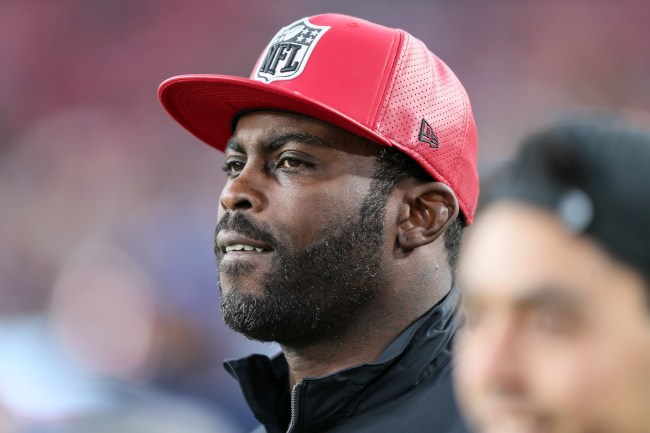 Earlier this year the NFL invited Vick, who spent 18 months in federal prison for his role in the Bad Newz Kennels dogfighting ring that led authorities to seize over 70 dogs, to the Pro Bowl to be one the four captains which lead to immediate backlash from a certain segment of fans who have still not been able to get over his crimes.

At the time 800k people signed a petition to have Vick removed from the Pro Bowl due to his past history of animal abuse.

Before Thursday night’s Seahawks-Cardinals, Vick made an appearance on the FOX pregame show and he started trending on Twitter because certain people were angry he was on TV.

Fox has Michael Vick on their pre-game show. What a ridiculous decision to have a felon dog killer on their show.

I will NEVER be able to look at Michael Vick without repulsion.

Michael Vick on Fox brings back visions tortured animals . I prefer not to have those images in my head Fox. I applaud his redemption but but maybe a job in the background would have been better.

Michael Vick on Fox Sports!!!!! Come on Fox – Do better. He is a vile human being. I want to sick my dog on him. There is no coming back from what he did. Going forward,, I'll always change the station until the show ends. @FOXSports #michaelvickisvile

Others immediately fired back at the backlash and argued Vick had done his time for his crimes.

#michaelvick what many of you don’t understand is that you cannot rehabilitate someone who’s capable of doing what he did to those innocent dogs. They are sick,disgusting,psychotic assholes who should be In jail for life. Just like murders,serial killers, rapists,child molesters.

Michael Vick admitted to hanging and drowning dogs who wouldn’t fight for him. @NFL @FoxNews elected to make him the face of Thursday Night Football.

He was a monster, a sociopath, an animal abuser. He did his time, sure, but he should never be celebrated like this. Shameful.

Michael Vick has paid his debt to society and been a positive role model for kids. He has earned redemption and frankly can do whatever he wants.

Michael Vick is a changed man who has spent the past decade fighting for animal rights organizations. The hatred of him by judgmental people will never be justified. He served his time. Let him live his life.