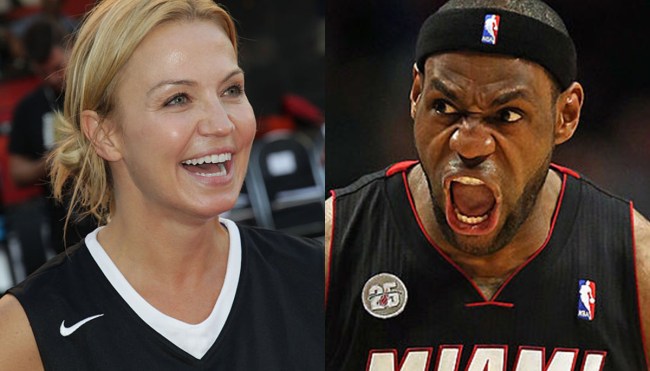 It’s been over a decade since LeBron James made the ill-fated decision to announce his free agency plans on the vanity project that was “The Decision,” a 75-minute special on ESPN that forced fans to sit through a half-hour of self-congratulatory television before the superstar announced he was taking his talents to South Beach and joining the Miami Heat.

While “The Decision” was partially designed to raise money for various charities (it ultimately generated $6 million), the philanthropic aspect wasn’t enough to shield James from the tsunami of criticism it managed to generate from fans, fellow players, and media personalities—including Michelle Beadle.

The former co-host of SportsNation and Get Up! was a vocal critic of LeBron during her time at ESPN, and while she’s far from the only person on the network to fall in that camp, it appears James took her words more personally than those of others based on a recent revelation.

Beadle’s time at ESPN came to an end after she agreed to a buyout in 2019, and after stepping away from the sports media world for a couple of years, she made her grand return with The Athletic this week with the launch of the What Did I Miss? podcast.

The inaugural episode featured fellow ESPN exile Paul Pierce walking back his claims about pooping his pants during the hallowed “Wheelchair Game,” but the duo also discussed a rumor that LeBron played a role in her exit, which led to Beadle spilling a bit of tea.

Michelle Beadle says LeBron James tried to get her fired from ESPN: pic.twitter.com/MtzGBr5P5u

Here’s what she had to say via The Spun:

“He did try to [get me fired]. I was like, ‘I’m honored I’m even on your mind. Thank you very much, sir. That’s a very weird place for me to be.

My stuff with him started off not personal. I made fun of ‘The Decision’ like 400,000 other talking heads did at the time. I think for some reason that was it. It wasn’t personal to begin, but now it will always be personal. It is what it is.

I’m very comfortable with not liking people. I think that’s what makes us all healthy. It’s the people who pretend they like everyone – you can’t trust them.”

We didn’t really need any more proof that LeBron James is one of the pettiest people on the planet, but this seems a bit much even for him.