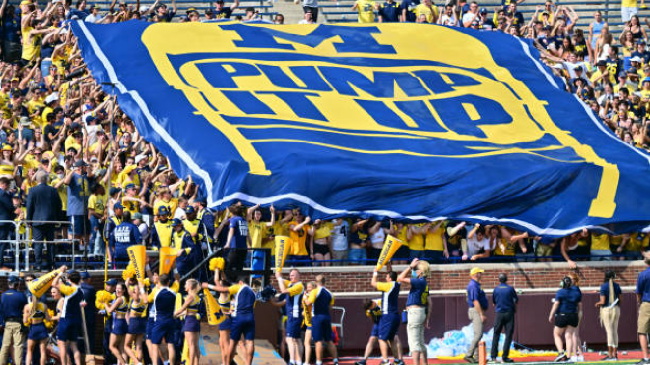 We are just 3 weeks into the college football season and sports books are already releasing lines for Thanksgiving weekend. To be more specific, they have already released a line for the biggest matchup of the weekend.

That weekend will feature the yearly rivalry game between Michigan and Ohio State, but this year it could have a little more importance than in most seasons. The Buckeyes are currently the #3 team in the country while the Wolverines hold the 4th spot in the rankings.

Both teams will likely be favored to win every single game they play leading up to that matchup, which would leave them both undefeated and would put the conference title on the line and potentially a spot in the college football playoff on the line in this game.

However, even with all of that potentially on the line in the last weekend of the regular season, it seems oddsmakers don’t expect this game to be all that competitive.

Today, an opening line for the game was released by FanDuel Sportsbook and they have Ohio State favored by 10.5 points.

Ohio State opens as a 10.5 point favorite for Thanksgiving weekend matchup against Michigan

Ohio State opens as 10½-point favorite vs. Michigan at @FDSportsbook (and, yes, game is 66 days away … and, yes, it's been 1,026 days since Michigan lost to Ohio State)

With the game being played in Columbus, it’s not much of a surprise that the Buckeyes are favored, but 10.5 seems like a pretty big line for a rivalry game between 2 teams who are currently both in the top 4 in the nation.

We also haven’t really seen much from either team that should be all that helpful in differentiating the two. Michigan has played one of the weakest schedules in college football so far.

Ohio State’s hasn’t been much better and their “big win” in Week 1 hasn’t aged particularly well with Notre Dame losing to Marshall and struggling to beat Cal over the past couple of weeks.

There’s still plenty of time left for perceptions about this matchup to change before it actually happens, but this is surely a line that Michigan fans won’t be happy to see.