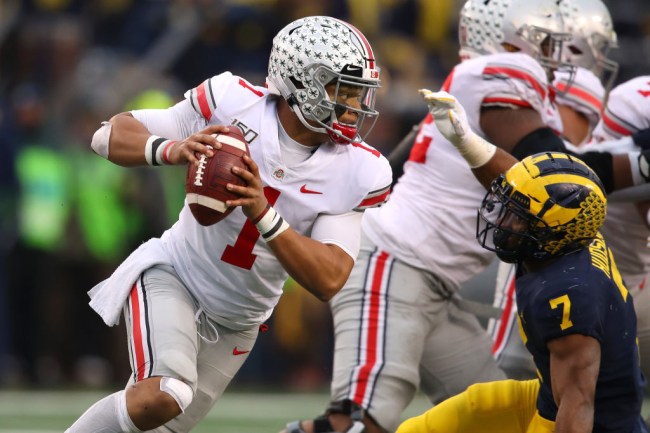 Ohio State has absolutely owned the rivalry series against Michigan not only over the past handful of seasons, but for quite some time now. The Wolverines last beat the Buckeyes in 2011 while Ohio State has won 15 of the last 16 meetings in the season-finale showdown.

You wouldn’t be wrong in thinking that it comes down to talent – a little bit of coaching, too – but mostly talent that has been the difference-maker over the years. Sure, a lucky bounce here and there helps, but if one team has beaten another eight straight times like Ohio State has Michigan, the obvious outlier here is the difference in talent.

The Buckeyes have been a better team over the last decade-plus, but that didn’t keep Michigan captain Khaleke Hudson from saying the Wolverines’ talent is better.

This all came about when a former Michigan videographer tweeted that he believed Ohio State’s facilities were better than Michigan’s so Hudson commented on the situation among reporters.

“I feel like our talent is better,” he told Wolverines Wire.

Hudson, who is the Wolverine in the featured image of this story seen missing the tackle on Justin Fields, has gone 0-for-4 against the Buckeyes in his college career. Ohio State has outscored Michigan 179-113 during that stretch as well.

Sure, he’s not going to come out and say that Ohio State is a better football team talent-wise, especially just days before Michigan’s bowl game, but nobody should be buying this.