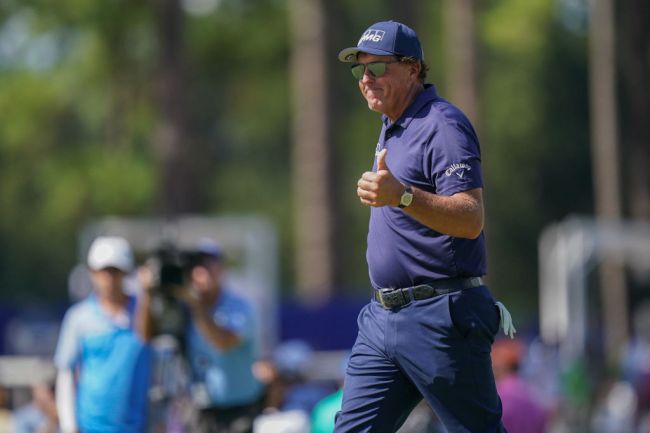 Halloween fell on a Sunday for the first time since 2010 and NFL stars took the opportunity to show up in some great pregame costumes. Among those who dressed up was Bills quarterback Josh Allen.

Allen, who is right-handed, payed homage to one of the greatest lefties in history. That, of course, would be none other than PGA golfer Phil Mickelson.

Mickelson, who has won 45 PGA Tour events, three Masters titles, two PGA Championships, and one Open Championship, has a very distinct look to him. He always rocks a large-brimmed visor and some very flashy sunglasses.

Allen did his best impression, but he broke PGA rules. The Tour’s policy says that players must wear pants in competitive rounds, so perhaps Allen went as Mickelson on an off-day.

Regardless of wearing shorts (which Allen is known to have an affinity toward), his costume caught the eye of Mickelson himself. The 51-year-old responded to what Buffalo dubbed “Josh Mickelson” and had a hilarious reaction in which he indirectly called himself seductive.

I find this new version of Josh Allen so seductive and yet I can’t quite put my finger on what exactly it is 🤔
GoBills 😂😂 https://t.co/Vf84zP9p78

Although Mickelson does not often talk about football, there is quite a bit of evidence that he’s a Bills fan— or at least a big Allen fan. He was friends with Conrad Dobler who, like Allen, played for both Wyoming and Buffalo.

Mickelson has also posted in support of Allen before. Now the quarterback is honoring one of the greats on Halloween.