Mike Evans Opens Up About His Horrific Dropped Ball Amid Buccaneers Rough Day Vs. The Panthers 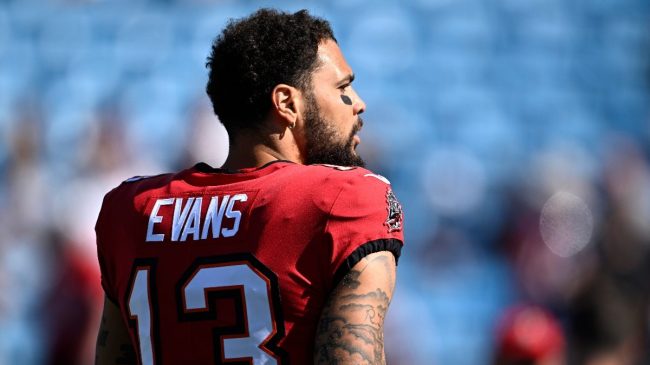 It was a disastrous day for the Tampa Bay Buccaneers as the team fell 3-4 on the season. Nothing has gone right so far, as they just don’t look like themselves right now. That’s especially true after Mike Evans dropped a would-be touchdown early in the contest. Now, the veteran receiver opens up about his horrific drop amid the Bucs’ struggles.

According to Sara Walsh, a defeated Mike Evans opened up about the poor game his Buccaneers played against the Carolina Panthers. He put a lot of blame on himself as his dropped ball would have been a big score for Tampa Bay. Walsh shares his full statement on what transpired on the field.

Mike Evans on the opening drive drop:
“I seen the life go out of us.” pic.twitter.com/vsP5Ua33iD

The Buccaneers look and sound completely lost right now. It’s been a brutal start to the year, as Tom Brady hasn’t quite looked himself. Additionally, the struggles at the offensive line aren’t helping either. Then, tack on Mike Evans’ drop and you have yourself a tough day against the Panthers.

Brady and Evans just haven’t been on the same page either. There is still plenty of time for the Buccaneers to turn things around this season. Especially considering the rest of the NFC South is a hot mess as well. Regardless, they need to figure things out fast, as Tampa Bay could be in trouble soon.

Look for Mike Evans to potentially have a bounce-back game in Week 8. The Buccaneers are set to face the Baltimore Ravens who have been a roller coaster in their own right. If Tampa Bay can get back on track then they could still salvage their season.