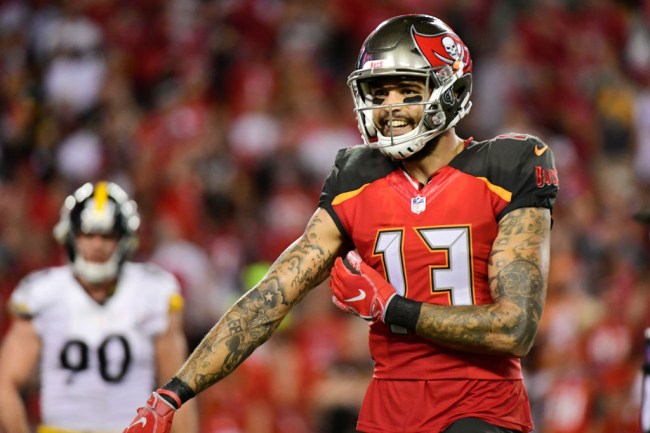 Mike Evans has had a very successful career in the NFL thus far. Since Tampa Bay drafted him with the seventh overall pick back in 2014, the Texas A&M product has caught a total of 462 passes and racked up at least 1,000 yards receiving in each of his six seasons in the league. He’s also a three-time Pro Bowler, but there’s still something missing for Evans.

The Bucs haven’t made the playoffs since the 2007-08 season and the team has had just one winning season since Evans arrived on the scene. So, it should go without saying that the wide out is pumped to have the greatest quarterback of all time on his side now.

While it’s difficult to properly celebrate the news of Tom Brady signing with the Bucs with everyone practicing social distancing and quarantining at the moment, Evans explained on Twitch that he’s still managed to get his hands on some Hennessy and have a few drinks.

“Bro, I’ve been on that Hennessy, man,” Evans said while playing Fortnite. “I’m drinking. I’ve got Tom Brady, you know what I’m saying?”

Sometimes it really is that perfect 😂pic.twitter.com/vhAHFWGZ20

The Bucs now have a quarterback under center that hasn’t missed the playoffs since 2002. Do you know what Evans was doing in the year 2002? Being a nine-year-old kid.

Related: Jameis Winston Posts Video Of Him Pushing An SUV Up A Hill To Try And Gain Attention From NFL Teams