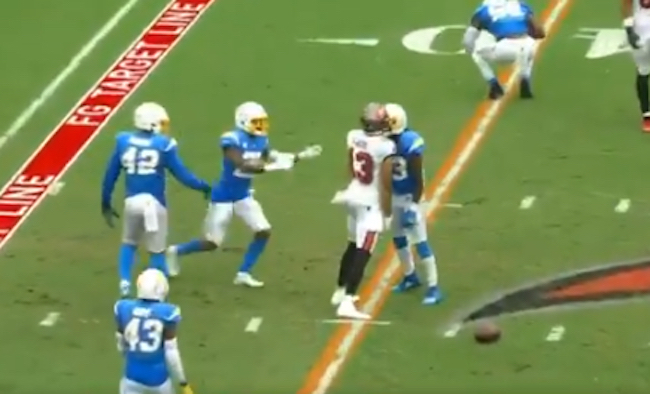 The Tampa Bay Buccaneers aren’t lighting the NFL on fire the way many insiders picked them to do at the start of the season.

Four weeks of frustration – and another Tom Brady pick-six – might have the team feeling their playoffs hopes might be a longshot because they’re banking on the arm of a 43-year-old quarterback.

Mike Evans showed his frustration on a 4th-and-10 throw that he felt should have been pass interference on the Los Angeles Chargers.

Chargers defensive back Rayshawn Jenkins said something to Evans and the pair got into a shoving match. Evans then got flagged for unnecessary roughness.

Evans ended up getting a touchdown later in the game but left with a possible leg injury in the 4th quarter.

Mike Evans got tackled awkwardly and left the game with an injury.pic.twitter.com/SbuMbEkaER