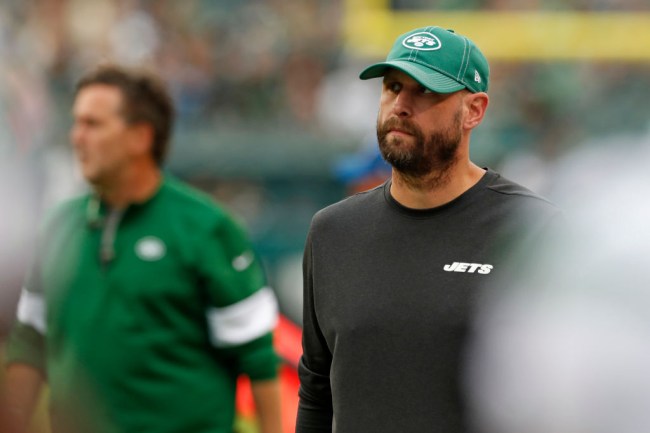 The New York Jets were embarrassed by the New England Patriots on Monday Night Football as they were shut out 33-0 at home. The night was bad, really bad, so bad that Sam Darnold was caught saying ‘I’m seeing ghosts’ after throwing his second interception of the first half.

New York is 1-6 and things are just flat-out horrible in Jet-land.

Darnold finished the night 11-of-32 through the air with four picks and a whopping 86 yards, and while fingers can and should be pointed at his performance, fingers need to be pointed at head coach Adam Gase as well.

That’s the direction ESPN’s Mike Greenberg went during a rant on Get Up.

“When your young quarterback, around whom you are building an entire franchise, is saying on national TV ‘I’m seeing ghosts out there,’ and you still have him out there down 33-0 against the Patriots and Bill Belichick … in my opinion, I’m not kidding when I say this, there was a one-and-done coach in the NFL last year in Arizona. And I believe Adam Gase is gonna be the same with the Jets this year.”

What Greenberg said here wasn’t wrong, in fact, he’s pretty spot-on. It perfectly sums up the mindset of any Jets fans out there. I mean, the quarterback you’re building a franchise around is mic’d up saying he’s seeing ghosts, I’m not sure it’s possible things to be any worse.

The Jets’ offense ranks last in the NFL averaging 209 yards per game and they are tied for fourth in the league in total turnovers with 13 on the year.

While the schedule gets easier in the coming weeks with matchups with the Jaguars, Dolphins, Redskins and Giants looming, there isn’t any sign that things will actually get better for the Jets.